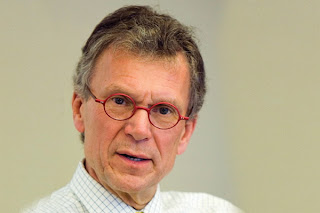 Tom Daschle has an incredible column in today's Wall Street Journal. He all but predicts the end of the world as we know it if we don't follow Obamacare.

Daschle begins with a Ted Kennedy "Little Engine That Could" sort of anecdote about not giving up. You can do it! You can climb that hill! I know it seems impossible, but don't quit!

Daschle says that "millions of Americans are now coming to realize that the status quo is not acceptable" and that's probably true. I think most of us want some kind of health care reform; reform isn't the problem as much as the suggested plans are. Nobody wants a government takeover of the health care system as Obama is proposing.

The oft quoted, but fallacious number, of uninsured then comes out once again: "Failure to address insurance coverage for all will mean that the numbers of uninsured in America will climb to more than 60 million people in 10 years from nearly 46 million now." One.more.time: it's NOT 46 million unless you want to count illegals and people that are choosing to be uninsured because they are young and invincible, and on and on. That number has been debunked so many times it's odd that Daschle even drags it out again. What's even more odd is that he says failure to pass Obamacare will increase the uninsured number, but fails to mention that more will be uninsured WITH the passage of Obamacare as they are forced out of the plans they currently have in favor of a public option, which as of now, is still on the table.

Daschle then blames the Republicans, of course, and says that Republicans have walked away from the table, refusing to participate in a bi-partisan solution: "Republicans who cry foul have only themselves to blame. First, they walked away from the table even though they had many opportunities to participate in White House meetings and in House and Senate committees over the past eight months—and eight years."

Your way or the highway, is that it, Mr. Daschle?

Republicans are not the ones holding up Obamacare, by the way. The Blue Dogs have a little something to do with that.

Daschle contends that Obamacare will provide "meaningful health reform should be to expand coverage, reduce projected costs, improve health-system quality, and enhance health-care options for all Americans." Pretty much all of that has proven not to be the case with the current plans under consideration which is why you're seeing the reaction that you are in the town halls. Americans are sick of being lied to.

No, Mr. Daschle, it's not that reform is "too hard" it's just that the Democrat plan is too expensive, will lead to rationing, and will lead to inferior health care for all Americans.
Posted by Pat Austin Becker at 5:21 AM

One.more.time: it's NOT 46 million unless you want to count illegals and people that are choosing to be uninsured because they are young and invincible, and on and on.

That should say something to us all. Perhaps that is subconscious self-incrimination out of guilt over lying about the true intent of the bill.

One.more.time: Alinsky Rule #4 says "Make them play by their rules".

Every one of those Congresstools has sworn to uphold the Constitution. What is the least-used word in their vocabulary?

Twice I've written my clown and wondered about the legal basis for the administration's policy.

Upon further reflection, one should complement TD on those rose-colored glasses frames.

Possibly the single most significant piece of eyewear in circulation at the moment.

I have been a doctor for about 35 years. In that time I have seen medicine change to a significant degree. There are problems. But the problems where caused by the Federal government trying to fix what was a very good situation. For instance, since the Feds got into the game seriously in the 80's, it is now illegal to give someone free care. Also, do you wonder why medical care cost so much and your premiums are high? Try the fact that the government does not in any way cover the cost of taking care of Medicare and Medicaid patients, in addition, hospitals and doctors are forced to give care to those that don't have insurance, such as illegals. Thus the cost is passed on and you are now paying an indirect tax. How does the government intend to take on additional responsibilities when it doesn't cover those currently under its care? The answer is like in Britian, rationing. That is the central aspect of national health care in all countries.

Also, consider that with socialized medicine, the doctors are not the ones socialized. It is you the patient.