Van Jones and the HuffPo Posts 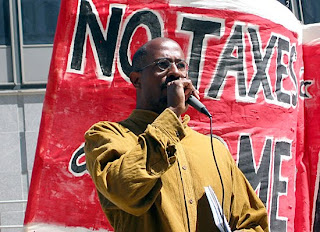 While reading Hot Air a while ago I caught Allahpundit's post which noted that the mainstream media is ignoring the Van Jones story. Silly me, thinking, WHAT!? NO WAY! had to go check.

A search of the NYTimes has nothing. Neither does the Washington Post. On ABC, Jake Tapper is covering the story. As of this posting, CBS has a rather cursory post on it which says Jones signed a Truther petition "six years ago" and that Conservatives are "clamoring" for his head.

You want news on the Van Jones story? It's all at Memeorandum, stringing on down the page.

Now tell me. Obama's Green Jobs Czar is a self-avowed communist, a believer in 9/11 conspiracy theories, a supporter of cop killer Mumia Abu-Jamal, and he's still employed by Barack Obama? By you, the taxpayer?

Then I came across this piece written by Jones for the Huffington Post in 2006. The title is "On Being Black at a Latino March" and Jones writes of his experience in a San Francisco "Day Without Immigrants" March. Jones laments the status of the Black Freedom Movement as he watches the optimism of the Latinos:

Deep inside, I was grieving for my own people. I wished that my beloved African-American community had managed, somehow, to retain our own sparkling sense of faith in a magnificent future. There was once a time when we, too, marched forward together, filled with utter confidence in the new day dawning. There was a time when we, too, believed that America's tomorrow held something bright for us ... and for our children.

But those dreams have been eaten away by the AIDS virus, laid off by down-sizers, locked out by smiling bigots, shot up by gang-bangers and buried in a corporate-run prison yard. Now we cling to Black History Month for validation or inspiration. That's because Black Present Moment is so depressing -- with worse, almost certainly, on the way.

When Katrina's floodwaters washed our problems back onto the front pages, the once-mighty Black Freedom Movement could not rise even to that occasion. Our legendary "movement" has collapsed, fallen apart. It is now a hollowed-out shell -- with our "spokespersons," both young and old, trying somehow to live off our past glories.

In celebrating the Latino's achievements he says we should "embrace those upon whom our economy has come to rest" and allow them status and protections. He says:

Strong brown hands have grabbed hold of the U.S. flag. They are pulling it away from those who have monopolized it, from bullies who have abused the nation's symbols for their violent and illegitimate ends.

Who exactly is he referring to when he speaks of "bullies" and those who "have abused the nation's symbols for their violent and illegitimate ends"?

A review of his other HuffPo articles show him to believe that Hurricane Katrina was "supercharged" by global warming and was Bush's fault (neglect, you know); he also laments the fact that we routinely abuse prisoners in domestic prisons and says it would actually be more a surprise if our military had NOT abused prisoners in Abu Ghraib and Gitmo. He believes that "people of color have much more directly at stake in the greening of America than white college students do" and if people of color don't become involved in the green movement, we'll end up with "eco-apartheid" as "Black, Latino, Asian and Native American communities suffer the most from the environmental ills of our industrial society." Everything is a race issue with him.

This guy passed the vetting process? Is Obama going to tell us when he throws Jones under the bus that he didn't know he was like this?

This guy wouldn't even get a security clearance for the military or a civil service job, much less the keys to the White House.

Linked you in an update, with an impish tease. ;)

"This guy wouldn't even get a security clearance for the military or a civil service job, much less the keys to the White House."

This works for both Van Jones and Obama.

Van Jones is a rank opportunistic narcissistic thug. We've seen his type before: lining up people beside mass graves in the woodlands of Russia and razing towns out of existence like Heydrich.

Well, two convicted felons got through GWB's vetting process and worked in the administration (getting taxpayer dollars) for 8 years, so I'm ok with Van Jones.

He's got a sense of humor and a track record of creating green jobs, so it's all good.

@Anonymous,
If there was a way to set up an alternate future,
where ignorance and louse equivalencies could be allowed to reach full bloom,
without everyone else being on the hook, too,
then I'd derive satisfaction from seeing you reap your whirlwind.

Nothing about the convicted felons?

I have a name!

Your "green jobs" fellow lasted how many hours after you posted?

Has a "track record of creating green jobs"? Where? At his unicorn factory?

Actually Jones has a history of creating racial divides and yelling public obsenities at opponents, but that's all good, right?

Yes, because yelling obscenities is much worse than being a convicted felon, right?

Where've you been, under a rock? Jones is a convicted felon. In jail is where he "found" communism.

But... but... but... Bush is so mean. And it's his fault somehow... and I all have is moral equivalency talking points... Bush was soooo mean... And unemployment was 85% under Bush and he killed babies to drink their blood...

And still after all your eight-year-old practiced outrage, your fellow is still gone, shooshed away in the dead of night, I might add.

No, he's not a felon, silly. He got arrested just like anti-abortion people do -- at a protest.

But he's no felon.

The White House felons were in the Bush administration and you all were just fine with that, unless you can point me to your personal protest about it.

Can you name the "felons" in Bush's Administration and cite a reputable source?

I am a conservative, and I can honestly say I disagreed with Bush and the Republicans and still do in some instances. But for some reason you Obamabots are so mesmerized by Obama and his crap that you can't see any faults with him or anything he says.

But then I once had liberal leanings, but Jimmy Carter cured me.