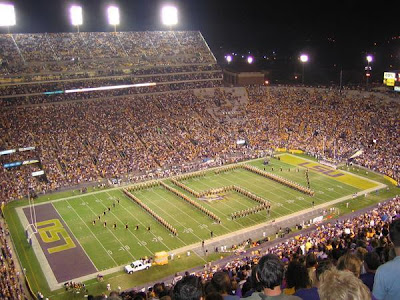 I love college football! I love my LSU Tigers who open tonight in the longest road trip in history against Seattle. I usually make gumbo for Opening Day but since the game isn't until 9:30 I think I'll save that ritual for the next one. It isn't quite cool enough today anyway.

I have plenty to do today to keep me busy though, without standing over the stove stirring a roux for 45 minutes. I have yard work, laundry, the never-ending-carpet-cleaning-until-puppy-is-housebroken thing, and some blogging to catch up on. Thank goodness it's a long weekend!

I've got to start off by reassuring Troglopundit, and Stacy McCain - not that he's worried, that no way now how is Levi Johnston in his underwear a threat to the great Speedo picture. Not.Gonna.Happen. The Speedo picture will live in infamy.

Snaggletoothie has a nice collection of videos up right now; he's in a piano mood lately. And check out the cars at the bottom of the page! I LOVE that butter and caramel number! Now THAT'S when American cars were cool!

Legal Insurrection notes the continuing ideological corruption at MSNBC. It seems they think conservatives are blowing the Van Jones issue and the school children speech out of proportion. Also on Van Jones was Robert Stacy McCain with this post which garnered him an Instalanche!

Van Jones in the music studio? WTF? Gateway Pundit has it. Incredible.

Liberty Belle has some very interesting observations about the indoctrination or even manipulation of school kids.

Sister Toldjah has some things to say about the AP running the photograph of the dying soldier over the family's objections. Donald Douglas also has a post on this, noting the Pentagon protest over the publication.

Pundette has me feeling disoriented as she flips things around on her blog! Still with the same top-notch posts however, she, too, is wondering how Van Jones ever got security clearance. Maybe Czars just don't have to worry about that pesky detail.

Even though Fishersville Mike must not read my blog, or he'd have linked me in his Czar Wars post, I still love him; be sure to catch his post on college football Saturday!

Sippican Cottage has some lovely architectural spotlights this week from Chatham. He also had a lovely piece this week about sending the young ones off to school.

While Van Jones has been a great distraction from ObamaCare, Doug Ross isn't so easily pulled off task; his post Democrat Health Care By the Numbers is spot on.

Heh! And Red, who is feeling poorly and needs good homemade chicken soup, made me laugh!

The Daley Gator had possibly the most bizarre story of the week...

Carolyn Tackett has some things to say about Home Ownership and Common Sense. That common sense thing? Sort of a lost commodity in Washington.

Left Coast Rebel has a collection of Van Jones videos you may not have seen. And Yukio at Critical Narrative has a roundup of all things Van Jones, plus his excellent commentary.

And finally, if you're feeling charitable and want to help a fellow blogger in need, visit Protein Wisdom. Bloggers stick together!

On to weekend things. I'll check in later.
Posted by Pat Austin Becker at 9:42 AM

I love your blog, but on Van Jones there was so much to choose from.
btw, I have my LSU t-shirt on. (our elementary school's gym teacher is a big LSU fan).

My money goes to Louisiana Tech, literally. (Study hard son). Go Bulldogs! Unfortuately, for teams like Tech they are used for cannon fodder at the beginning of each season. Today they are at Auburn.
Another cheer goes to the Yellowjacket from Graceland University (Iowa). May their season be not as tough as last year's.

In your included picture is the Tiger marching band spelling out 'ns7' or 'n57?' :)

@S.Burri
They don't teach you boys to read upside down up there? Lordy me! :)

Believe me, Pat, I wasn't worried.