Full Metal Jacket Reach Around: The 9/11 Round Up Edition 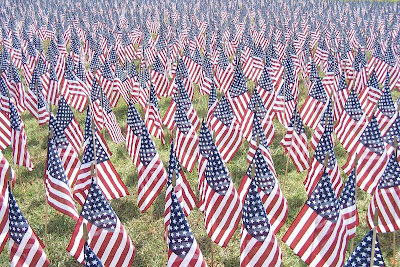 What a busy weekend!  I've been on the go all.weekend.long.  Yesterday was consumed with a million errands and yard work while today was filled with visiting my mom and school work.  I had to grade papers, update the gradebook and get lesson plans in order for the week.  I took time out yesterday to watch that messy LSU/Vandy game; was not too impressed with my Tigers.  If they don't get it together the big SEC teams with kill them.  Today, Steve and I went over to the Bossier Municipal Complex to see the flags put out by the kids from the Minden Youth Challenge program.  They put out over 3,000 flags in memory of the 9/11 victims.  Awesome sight.

Let's do a quick sift of the blogosphere and see what all I've missed while I've been busy this weekend:

Emptysuit reports that poverty is at an all time high.

Doug Ross reports on gun battles in Arizona between agents and smugglers.  Not good.

Pirate's Cove has the story of Obama's veto of solar panels at The White House.

Legal Insurrection has a must read post on The Southern Poverty Law Center. 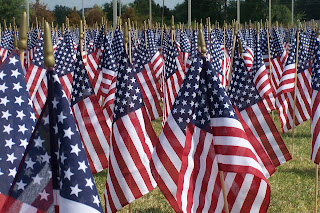 Stacy McCain and Smitty have a great post on the 9/12 rally with lots of pictures, once they finally found the mall, that is.

Bride of Rove has an insightful conversation with a doctor.

Red has added a new word to her banned word list.

There's lots more, I'm sure, but it's getting late and I have to do a couple more school related tasks before work tomorrow.  Here's hoping for a calm, sane week and I can finally get caught up.
Posted by Pat Austin Becker at 8:25 PM

My week end started with breakfast with friends and then working a little Saturday afternoon, then Mass. Sunday was vsits from friends and reading the papers and a nap. I'm thinking as it's cool tonight, maybe a brief soak in the hot tub.