An Update on the Obamatorium 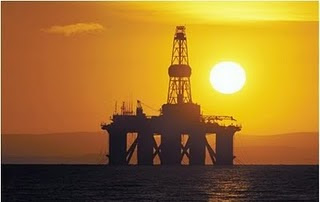 I did many posts on the BP/Gulf situation this summer and the Obama imposed moratorium that followed.

The Wall Street Journal posts an editorial that updates the current situaiton:

Today, 15 of the Gulf's 46 shallow-water rigs are idle, due to a lack of new permits. The industry estimates that, at this rate, by Halloween 70% of shallow-water drillers will be idle. The Administration did not include any of these figures in its analysis.

The "jobs lost" figures provided by Team Obama are predictably lower than the analysis from most everyone else. Once you idle 70% of the shallow-water rigs, well, that's lots of jobs.

And there's the rub. The real fear is that the Administration is using the oil spill as an excuse to shut down the drilling that the enviro left finds so offensive. The President stacked his oil-spill commission with antidrilling environmentalists, who will be predisposed to recommend that any lifting of the ban be accompanied by a severe regulatory regime. The result would be a moratorium in everything but name.

Oh ye dirty politics, you.  What was that Mike Spence said?

The president is not our teacher, our tutor, our guide or ruler. He does not command us, we command him. We serve neither him nor his vision. It is not his job or his prerogative to redefine custom, law and beliefs; to appropriate industries; to seize the country, as it were, by the shoulders or by the throat so as to impose by force of theatrical charisma his justice upon 300 million others. It is neither his job nor his prerogative to shift the power of decision away from them, and to him and the acolytes of his choosing.

Be sure to check out the Press-Register's series profiling victims of the oil spill.


So as we celebrate the long-awaiting killing of this particular well, let's also remember that Team Obama's political and arbitrary moratorium is costing the Gulf region some 20,000 jobs and the American oil supply some 30 million barrels in 2011 (NOT purchased from foreign sources).
Posted by Pat Austin Becker at 7:12 PM