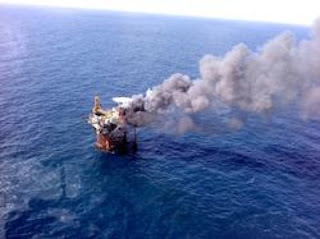 The latest on today's oil rig explosion from NOLA is that up to thirteen rig workers are being examined and treated at a Houma hospital but there is no word at this time about their condition.  However, Governor Jindal visited them this afternoon and according to NOLA:


Jindal said he visited with the workers and was pleased that none was injured. "They didn't have any visible injuries and they're eager to get home as soon as possible,'' the governor said.

Left Coast Rebel has the unfolding of events today here (with photos!)

The Houma Courier points out that this rig is in much shallower water that the BP rig which blew earlier this year:

The platform is in about 340 feet of water and about 100 miles south of Louisiana's Vermilion Bay. It's location is considered shallow water, much less than the approximately 5,000 feet where BP's well spewed oil and gas for three months after the April rig explosion.

The Times-Picayune has this graphic showing the relation of this rig to the BP rig. 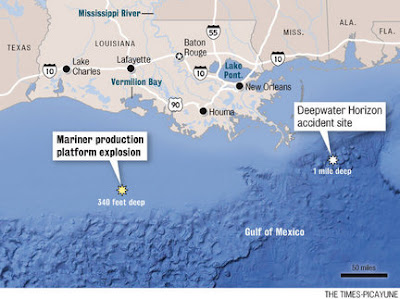 There were seven active wells on this particular platform and they have been shut down.

Via The Dead Pelican also comes this NOLA report of the Coast Guard reporting a sheen in the water emanating from and unknown source:

[Jindal] said the company didn't believe any of them were leaking oil, but the Coast Guard has since reported seeing a mile-long sheen on the water stretching from the accident site, which is 102 statutory miles, or about 80 nautical miles, off the Louisiana coast.

It is unclear at this time where the oil or fuel that's making the sheen is coming from.

There is debate as to whether or not that sheen exists; the AP reports that there is no sheen.

Latest reports are that the fire has been contained "but is still burning."

And of course the rumors are already abounding about the origin of the disaster; so far I've seen where the Obama administration blew it up to reaffirm the need for the moratorium, that it was Bush's fault, that MoveOn.org is responsible...; and I'm not linking to them because perpetuating these silly suggestions isn't really helpful.  I only mention them to remind us all that the loons are still out there.

It remains a fact that the business of oil production is and has always been a dangerous one; the workers all understand that when they sign on, just as say, coal miners, for example, do.  Accidents happen.  Fortunately, in this case. safety training saved the lives of thirteen men and they had the good sense and wherewithal to use that training.

It is true that the Obamatorium is devastating to Louisiana:

[Eric] Smith [Associate Director of Tulane University's Energy Institute] says the impact of the moratorium will worsen in the months ahead. He says drilling rigs cost up to a million dollars a day, so oil companies cannot afford to leave them idle. He says eight rigs that were on their way to the Gulf were diverted to other locations after the ban was imposed, and two others have left since then.  "If you are a company like Murphy, which is one of the rigs that did leave, and you have prospects in Africa as well as here and you see you cannot drill in the Gulf for a couple of years and you are under contract for the rig for five years, you will just move it to Africa and work," he explained.

Recently-published reports show that US government officials have estimated the moratorium could cost around 23,000 US jobs.

This explosion is already causing the "I told you so" people to reaffirm the need for a moratorium on drilling. Via the L.A. Times comes this:


“Today’s news comes as no surprise,” said Kieran Suckling, executive director of the Tucson-based Center for Biological Diversity. “Offshore drilling in the Gulf of Mexico is like playing Russian roulette. Its not a matter of if something will go wrong, it’s a matter of when.”

I guess once all those windmills and solar panels spring up all over the country and all those mysterious "green jobs" emerge, we just won't have this kind of problem anymore. Either that or the libs will eventually realize we're a nation that is dependent on oil and we have plenty of our own without having to rely on foreign sources if they'd just let us go for it.
Posted by Pat Austin Becker at 5:23 PM

As the wells that have apparently had to cease ops due to the Obamatorium the equipment will start to fail all over. This is what Obie wants to have happen. It's a claculated plan to reek more havoc. Maybe Louisiana ought to just secede again....