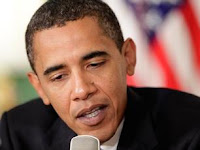 Politico is headlining a new GWU/Politico poll  this morning which indicates a "rocky road" ahead for Obama.  This is news to no one, but there are things in the poll that I found interesting.  This, for example:

It’s Obama’s policies that are hurting him right now. By a 13-point margin, voters are down on the health care law. In an especially troubling sign, more than half of self-identified independents — 54 percent — have an unfavorable opinion of the law, compared with just 38 percent who have a favorable opinion.

This is interesting to me because if one listened to Obama, you'd think all the nation's ill are George Bush's fault, yet this poll seems to indicate differently: it's Obama's policies that are dragging him down.  And look at those independents who are jumping ship!
Obama's approval rating in this poll is under water at 46%.
There is polling information about the Tea Party included, as well as how the group is perceived throughout various parts of the nation.  It's no surprise really that 47% in the Northeast hold an unfavorable rating, although some Tea Party candidates have done fairly well there.  Doug Hoffman in the NY-23 race did pretty well earlier this year; he didn't win, but he did have an impressive eleventh hour surge thanks to the Tea Party.  Christine O'Donnell in Delaware unseated a RINO in her primary and is backed by the Tea Party.  Scott Brown...and so on.  The Tea Party seems to be viewed more favorably in the Mountain West region which is sort of surprising to me.
Another interesting stat: in this poll, 77% of the respondents identified themselves as "white,"  12% as "black," and 7% as "Hispanic."
The part of the poll that dismays me, however, and which I've posted before, is the names trotted out on the Republican ticket.  Same old retreads.  This poll has Huckabee in the lead and Romney right behind.  Mike Spence wasn't mentioned, but I don't know that he's said one way or the other if he's in the hunt or not.  He's gotten some positive buzz this week, though.
Oddly, 81% of those polled never heard of John Thune.  64% never heard of Tim Pawlenty and he's made numerous trips to Iowa already!
As with all polls, take it with a grain of salt.  Most of us won't really start focusing on 2012 until the November elections are over, but it might be interesting in a year or so to pull this poll back out and see what's changed.
One thing that won't change, I'm predicting, is Obama's approval rating.  Except it will probably be lower as his policies continue to take hold and eat away at you.
Complete poll results here (PDF - 14 pgs).
Posted by Pat Austin Becker at 5:30 AM