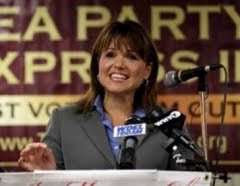 The Other McCain is live on scene.

Last Thoughts:  And now the pontificating can REALLY begin as to whether or not O'Donnell can win the general election or not.  Has Delaware now turned over the potential Senate majority all because of the Tea Party?!   Mary Katharine Ham "retweets" that DE has gone from "Strong Rep: to Strong Dem".   On the other hand, Michelle Malkin notes that

So can O'Donnell win a Senate seat?  The way I see it, maybe Delaware Republicans did sacrifice "the Senate majority" for the sake of ideology, but honestly, putting Castle back up there is no different than having a Democrat in the seat regardless of the designation after his name.  If Delaware voters wanted to send a message, I believe they just did.


Now let's see if New York puts Rangel back in there.

I think it's good news too. The more off the rails the GOP candidate the better the Dem's have to pick up a Senate seat.

I like what Limbaugh had to say today about this race. He said what difference would it make if O'Donnell didn't win, if Castle had won and gone on to win in the general election it would be like putting a Democrat in office. Castle votes with the Democrats a majority of the time anyway.