At a Critical Crossroad 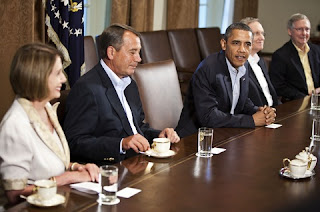 Mitch McConnell nails the bottom line on the Senate floor today.  Via WSJ:

"But after years of discussions and months of negotiations, I have little question that as long as this president is in the Oval Office, a real solution is unattainable," Mr. McConnell said in a Senate floor speech.

He sounds discouraged.   The Republicans are under much pressure not to cave on this - to hold the line.  In truth, it would be difficult to deal with Obama on this issue because he's taken so many different positions.  Victor Davis Hanson points out:

He calls for more taxes, but in December reiterated — after the midterm shellacking — that it was unwise to raise taxes in times of uncertainty. Apparently that was then, this is now; perhaps he calculates that the tea-party angst has peaked.

He deplores threats not to raise the debt ceiling, but as a senator in 2006 voted, replete with lectures on fiscal sobriety, to do just that — even though the debt then was $5 trillion smaller and the economy far stronger.

He talks of “eating our peas” and doing the hard work of getting the budget balanced, but had he his way, budgets for the next four years would have had even greater deficits. Obviously such calls for prudence are a result only of the 2010 elections and do not characterize his own reckless budgets the two years prior.

It's difficult to know which Obama you're dealing with, I suppose.  And Joe Biden is yelling at the Republicans to "get real"? Meanwhile, Tim "Turbo Tax" Geithner ratchets up the fear factor.

"Every aspect of life in America today is worse than it was when [President Obama] took over. Unemployment higher. Interest rates. The only thing that has gone down in America over the last two years is the value of your home. This president has mismanaged this economy. He has been incompetent in his management of this economy," Sen. Marco Rubio (R-FL) said on "Hannity."


Talk about speaking the truth!  Rubio nails it once again.  I can't wait until he's ready to move forward on the national stage.  For now, he vows he will not be anyone's running mate this go around.,

McConnell might be on to something in his hopes that Obama is a one-termer.  Hot Air links to this comment in Obama's presser this week in which he seems to promise "massive job-killing tax increases":

“So, when you hear folks saying ‘Well, the president shouldn’t want massive job killing tax increases when the economy is this weak.’ Nobody’s looking to raise taxes right now. We’re talking about potentially 2013 and the out years.”

Is that really what he meant?  Is he that dense to tip his hand in such an amateur fashion?  Well....

Debt ceiling negotiations continue this afternoon at The White House.  Adam Hasner sees this as a critical crossroads:

After months of posturing and failed leadership from President Obama and politicians of both parties, the debate on the debt limit is finally coming to a head.

I honestly believe we have reached a moment in history when the fate of our country is at a crossroads.

Down one road is an uncertain future marked by reckless spending that deepens the debt and deficits that are killing jobs and holding American prosperity hostage. The elites and experts tell us we have no choice but to accept the path of higher taxes and new borrowing. And naturally, they prophesize disaster if we don’t continue down the only path the rest of us know America can’t afford.


Oh to be a fly in the room during those negotiations.
Posted by Pat Austin Becker at 11:30 AM

I predict this issue (debt ceiling negotiations) will eventually split the Republican party: Establishment Republicans(McConnell, Boehner) versus the Tea Party wing. This will work to Obama's advantage and will be a factor contributing to his reelection.