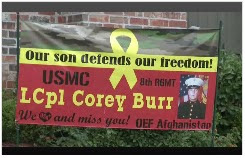 Last spring I reported on the dispute between the Homeowner's Association at The Gardens of Southgate and marine parents Tim and Jodi Burr.

You'll recall that the Burrs have  a sign of support for their son, Corey, who is fighting in Afghanistan.  The Homeowner's Association has demanded that they take the sign down.

My previous posts are here.

And now it's on Drudge.  The Drudge Report links to this article in NOLA:

A south Bossier City homeowners association has sued to force a family to remove a front yard sign supporting their son's military service because it violated subdivision covenants.

The Times reports that the Gardens of Southgate filed the suit this month against Timothy and Jodi Burr, who have lived in the subdivision since 2006. The Burrs placed a large multicolored banner with a picture of their 20-year-old son, Marine Corps Lance Cpl. Corey Burr, and the phrase "Our son defends our freedom" in January after Corey Burr was deployed to Afghanistan.

Jodi Burr says her family will fight the suit and do not intend to remove the sign.  An attorney representing the association, declined to comment.

The Burrs contend signs supporting a school or team are visible throughout the neighborhood.

When I last spoke to Jodi Burr she explained that they had tried to contact the HOA for clarification on the rules before they put up their sign and were ignored (twice).   As the NOLA piece, and my previous posts, indicate, the Burrs position is that there are other flags, signs, and banners of various sizes in the neighborhood so why are they being singled out?

How far do those rules go?  Jodi used the example of a fence sign.  A neighbor might have a cyclone fence that has a "Hercules Fence" sign on it.  Does that violate the covenant?  Or what about a banner in someone's flower bed with a big initial on it?  What about school pride signs?  Why HER banner?

At any rate, it seems the case is finally getting national attention.

SIGIS will keep you posted.

Update:  Here is the link to the Shreveport Times article cited by NOLA.  They write:

Jodi Burr said she and her family plan to fight the suit and do not intend to remove the sign."I hate that it's coming to this," she said. "I had hoped with the former ugliness that we were done, but unfortunately, we're not, and we're going to continue to push on."

The position of the Burrs is explained as well:

This week, the Burrs filed an official response to the suit, citing two main points. The first is that the HOA has abandoned the covenant restrictions on signs by not fully enforcing them. The covenants of the subdivision specify only real estate or builder signs are allowed in public view.

However, other types of signs, such as those supporting a school or team, are visible throughout the neighborhood.


The second point asserts that forcing the Burrs to remove their sign is a direct violation of the freedom of expression granted in the state and U.S. constitutions.

Burr said she understands the issue is likely with the size of the sign, which is what most would consider a banner, and she would be happy to modify it, if that was indeed the problem. However, the HOA has not enabled her to discuss the issue with them.

The HOA has continuously refused to meet with the Burrs on this or discuss the matter with them.  They made contact one time by sending a member of the HOA, an active duty armed forces member, to meet with them (as explained in my original post.)  He was not interested in their position but only asked them to take the sign down.  The Burrs request for a meeting with the board was never acknowledged.


Previously:
Homeowner's Association Demands Removal of Sign of Support for Marine
Attorney for HOA Responds in Banner Dispute
Posted by Pat Austin Becker at 9:23 AM

HOAholes: What a bunch of spineless tools. If ever a group of folks needed a bitch-slap, they're it.