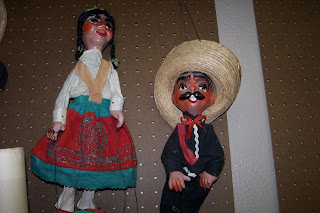 Steve and I ducked out of town for a few hours this afternoon and got lost in the four floors of treasures at Second Hand Rose Antiques in Minden.  As many times as we've been over there, each time we go is like a totally new experience because there is just so much to see.  Plus, Milly Rose is always unloading new stuff.  More on that later.

I knew I wasn't going to be moving around the store a whole lot today like I normally do because of this bum ankle.  (It's better but still gimpy and quite sore.)  It would be easy to overdo and walk around on it too much at Milly's.

(As always, if you click on the picture, the image is much sharper and easier to see.)

One of the first things I noticed was this new addition: 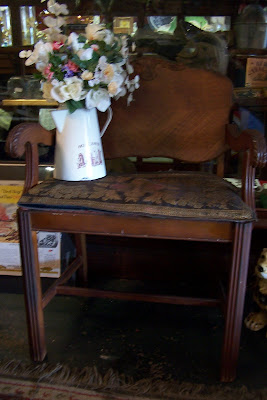 It's a great, sturdy vanity chair.  Milly had aspirations about recovering the seat but hasn't gotten around to it.  Sounds like an easy project for whomever buys it!  Better hurry; I have my eye on it.

This Underwood typewriter is another new addition: 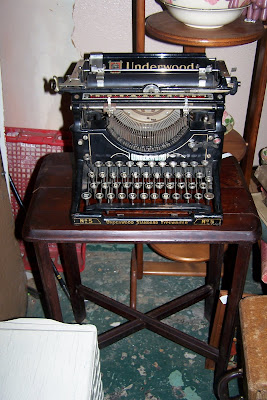 I like the table its on.  I don't need another antique typewriter.  I bought that German one for Steve last year, but this one is very clean and works great! 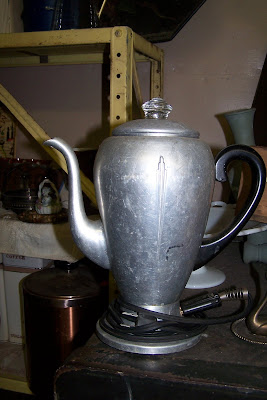 I thought this huge jar was cool; on one side is an eagle and on the other it says Mason's and a patent number: 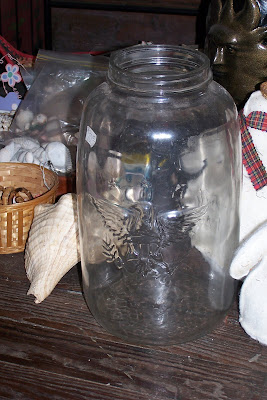 I'm going to show my ignorance here - are these ashtrays?  They're too pretty to be ashtrays! 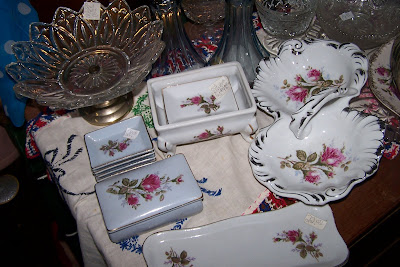 Milly has several old fans around; I love this one: 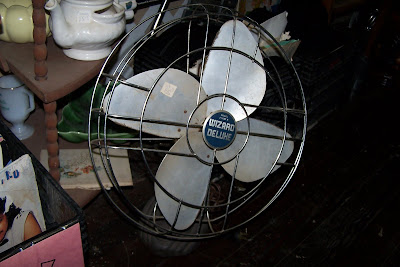 FDR over your mantle? 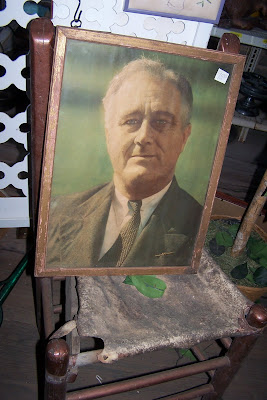 I caught one of Milly's Boston Terriers coming out of the rest room (that's where her water bowl is): 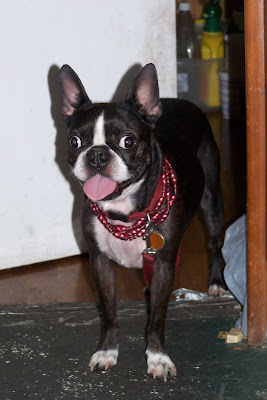 About this time Milly and Steve had gone up to the third floor to empty out some old trunks full of stuff that Milly had bought.  It was too hot to work up there so they brought them down and we started going through them.  It was like finding treasure!  Milly had no real idea what was in them so we were all surprised to find a bunch of old feed sacks, among other things.  I loved this one: 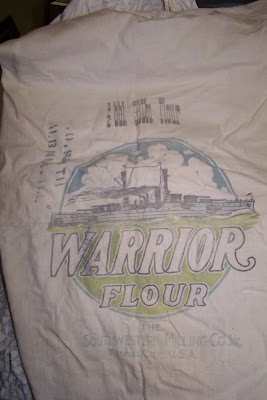 And then we pulled out this incredibly wrinkled petticoat.  Check out the detailed hand work in this thing: 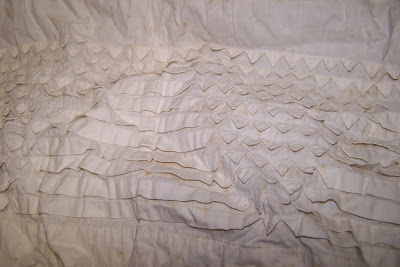 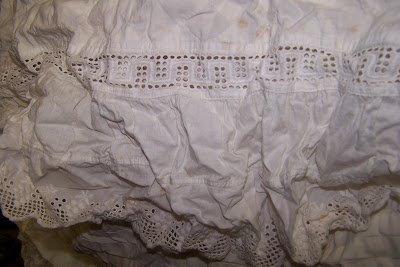 This thing is going to be so incredibly cool when Milly gets it cleaned up and ironed out.  The detail work on it was incredible.

Milly was over-the-moon thrilled to find these "Turkey Red" pieces; we suspect they were used as shams: 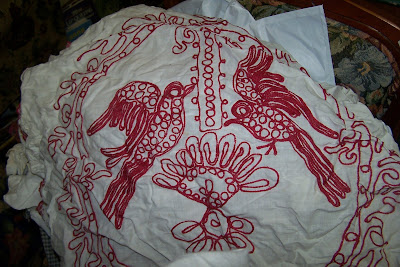 There are four of them (two matching sets). 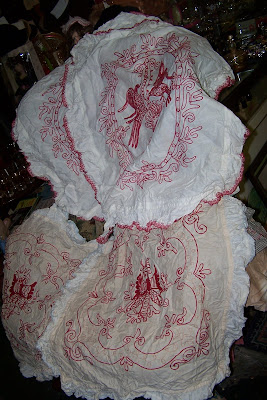 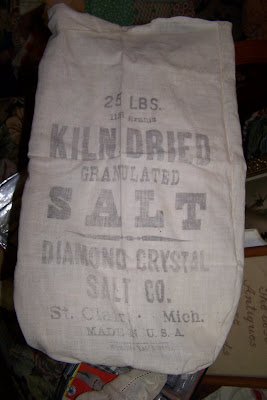 Salt, obviously.  And this one is a real treasure from the Minden Cotton Oil and Ice Company; it held Cottonseed Meal. 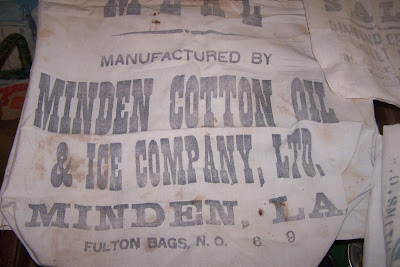 There were several feed and flour sacks but they didn't all photograph well because they were quite faded.  There were also two long, floor length almost, aprons that are going to be fabulous once they are washed and ironed.  Antique aprons are apparently quite chic these days!

After digging through the trunks we washed up and gathered around Milly's desk for some cold watermelon from her farm.  Reward for hard work!

As we were preparing to gather our treasures and leave, Milly laid out her Bobby Hebert autographed cards: 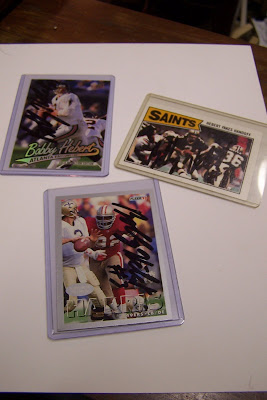 A true "must have" for any Saints collector! 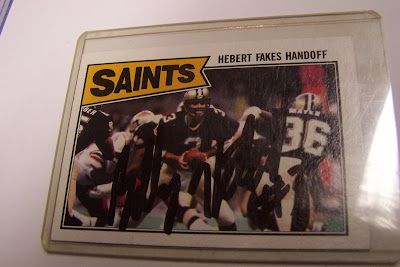 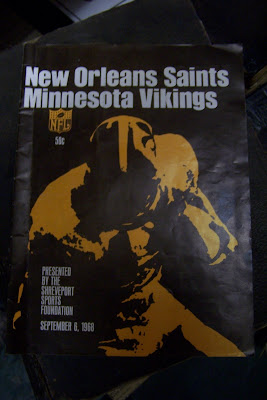 Steve thought this was funny: 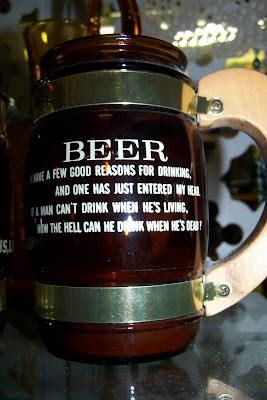 And I have my eye on these: 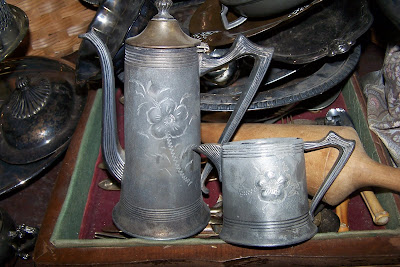 I spent hours reading these as a kid; my brother had stacks of them: 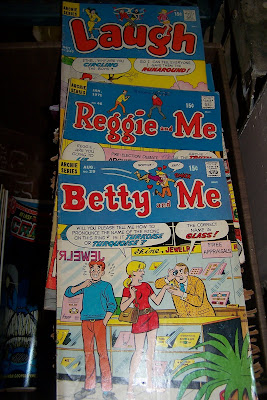 I'll leave you with a quiz.  Who knows what this is? 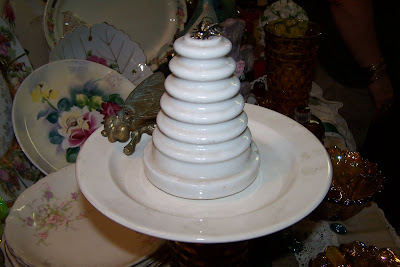 What did I bring home today?  Milly loaded me down with lagniappe today - a vintage gold barrette which I promptly used to pull my hair up and clip it back to beat the heat.  An old French Market coffee can; will be cute in my kitchen!

I bought this fabulous milk glass pin tray.  It's about 5" x 3" and when you hold it up to the light it looks like it's outlined in fiery orange opalescence.  It's gorgeous! 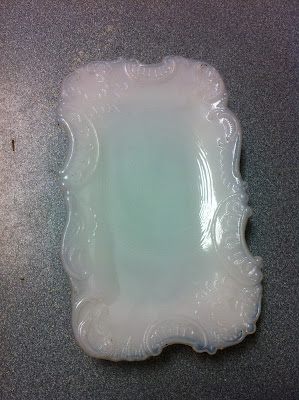 I also picked out some maps from that old box of maps I posted last time.  I got the New York one: 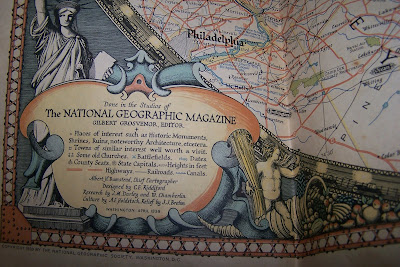 (Click on that map to see it clearly - the graphics are great!)
I also picked out two of the Pacific region, both dated 1944.  One of them has Iwo Jima drawn in because it wasn't even on the map then.  The fourth one I picked was of Germany - 1939.
By this point my ankle was throbbing; my shoe came off as soon as we got to the car.  We headed back down the highway toward home.  I can't wait to get back over and see those aprons and petticoats all cleaned up and done up!
As always, if you see something (or are looking for something) you need, give Milly Rose a call (318-371-9830) and she'll ship it right on out to you.  Check out previous posts, too.
Posted by Pat Austin Becker at 10:34 PM

I love those old coffee percolators too. They made great coffee!

The old Underwood typewriter is just like the one my father owned when I was but a wee lad. I had much fun playing with it, getting ribbon ink all over my hands. The thing weighed a ton.

@Stogie,
I love the percolator, but when I make coffee, I still use one of those old timey drip pots - the kind that lets the tiny grounds slip through into your coffee! Good times.