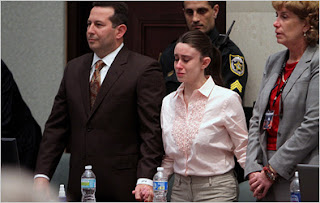 The headline of the day probably goes to The Other McCain:

I didn't watch the trial much; I watched the last couple of days a bit while I've been sitting here with this bum ankle (it's getting better, thanks).  The whole thing reminded me of the O.J. trial which I actually did watch way (way, way) too much of.

What we can take away from this trial, as best I can tell, is that pundits don't know everything, that trials really shouldn't be televised wall to wall, and that in Florida you can murder your child, throw her in a swamp, and get a great book deal in the end, which is likely what Casey will do.

Whether you followed the trial much or not, be sure to check out Stacy's post because it's hilarious:

While Casey has been acquitted of murder, she is certainly guilty of being a lying slut but — just like hogging up cable-news coverage — that’s not a death-penalty crime in Florida.

And then check out Donald Douglas who has an aggregation of links.

I GUESS THE MORAL IS, “DON’T TALK TO THE COPS?”

And Drudge has Nancy Grace upside down: 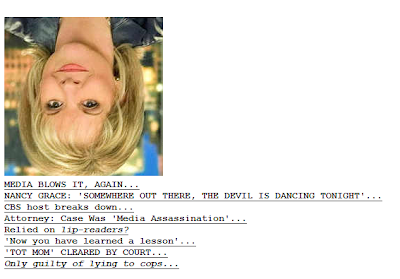 I guess now we can get back to the real news.

On Casey Anthony winning her trail. I'm with RUSH, if the baby had been killed in the womb the Democrats and Lame Stream Media would make her a star, nuff said!

So does he mean, and apparently you, being that she is a star and killed her child at the age of 2 (not in womb) that the republicans made her be that star..... maybe its a debut of their healthcare plan, don't bother trying to take your kids to the hospital or call 911 you won't afford it??????