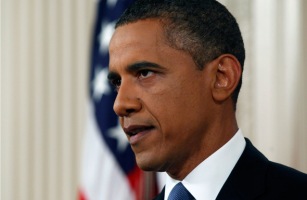 Hmmm.  Something tells me that the video clip I used in the last post might work better for this one.

It sounds like Obama is cracking under the pressure to me.  His "abrubt" exit from the debt negotiation this afternoon was petulant, childish, and at the very least, unprofessional.  Mr. Obama is not accustomed to losing.  Those community organizing skills are not working so well for him right now.  Via The Corner:

At this point, Cantor explained, the president became “very agitated” and said he had “sat here long enough,” that “Ronald Reagan wouldn’t sit here like this” and “something’s got to give.” Obama then told Republicans they either needed to compromise on their insistence on a dollar for dollar ratio of spending cuts to debt increase or agree to a “grand bargain” including massive tax increases. Before walking out of the room, Cantor said, the president told him: “Eric, don’t call my bluff. I’m going to the American people with this.” He then “shoved back” and said “I’ll see you tomorrow.”

This is one (and only one) example where his inexperience shows.  Had he ever led a business, been CEO of anything, had executive experience as a governor, ever done anything of significance beyond 144 days in the senate before running for president we might be further along in these negotiations.

Breaking at about the same time was news that Moody's put us on "downgrade watch."     Just too much pressure for the man-child?  Maybe Obama didn't like being compared to Jell-o.  Or maybe Cantor didn't get the memo that Obama was feeling testy today.  Who knows.

If Obama is attempting to channel Reagan and his summit at Reykjavik he's falling way short.  As Pundette says:

Since he brought up the comparison, imagine Reagan throwing a tantrum like that. Or never coming up with a plan of his own.

The spin has already begun as the left points to Eric Cantor and his line-in-the-sand moment previously, but again, I would suggest that maybe we expect more from our president.  Maybe as president you have to rise above petty things and learn to compromise.

"I have reached the point where I say enough," Obama said, according to the aide. "Would Ronald Reagan be sitting here? I've reached my limit. This may bring my presidency down, but I will not yield on this."


Quote of the day (filed under WTF?) goes to Nancy Pelosi:


“He stayed for two and a half hours and listened to what members had to say. It was his meeting and the meeting had come to an end,” she said.

“The president could not have been more gracious. I have never seen a president spend so much time with the leadership of Congress day in and day out, respectful of their concerns,” Pelosi added.

Respectful?  Gracious?  I guess she has a different perspective of "gracious" than I do.  I call it childish.

And all the empty threats! Signs of desperation abound- like you said Pat, 'bring it on' lol

These narcissist types really start to freak out when their fraud-based lives have the fantasy stripped away by something or somebody... reality is what is doing it to this one

pelosi seems to have been in the butt kissin meeting......

Puerile Punk of a President Threatens, Sulks... then Takes His Ball and Goes Home (video: Obama storms out!)

The problem Pelosi has is that bottle of scotch that keeps her going, most of the day, and those pills--must be--that help her sleep at night with the conscience she must have. The woman is just one drink shy of a load, and we're paying for it. As to the man-child, he needs to move his desk out on the street and forget about pretending to be a grown up.