Governor Jindal Has Some National Energy Suggestions for Obama 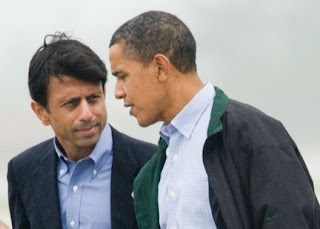 In his weekly address, Obama attempted to perpetuate the myth that he is trying to bring down gas prices and make your life easier:

“I’m going to keep doing everything I can to help you save money on gas, both right now and in the future,” Obama said. “I hope politicians from both sides of the aisle join me.”


He myopically says "we can't just drill our way to lower gas prices," leaving the impression that his pet green energy projects are our only answer; that and to quit using so much oil.

If he is sincere in reaching across the aisle to lower energy prices he might take a look at Governor Jindal's suggestions for a clear national energy policy.

In Monday's Wall Street Journal, Jindal outlines an energy policy driven by opening drilling fields, a more rational tax code, and reversing "a series of cabinet-level decisions that are at odds with a strategy of affordable domestic energy production."

Additionally, Jindal calls for Obama to approve the Keystone pipeline:

Finally, the president should announce today that he's going to reverse his decision on the Keystone XL pipeline. This pipeline would produce 20,000 construction jobs and 100,000 indirect jobs, and it would provide a much-needed transportation line between oil refineries along our Gulf Coast and production facilities in Canada, not to mention the booming Bakken oil fields of Montana and North Dakota. Our friends to the north have been reliable and steadfast trading partners, and the president should be making this pipeline decision on policy grounds instead of cheap political appeals to his liberal base.


While Obama would like to have us believe he is trying to lower gas prices and claims that drilling is at an all time high, Jindal disagrees:

While the president is quick to tell anyone who will listen that domestic oil production is higher today than at any time since 2003, that's not the whole story. The truth is that today's production levels are not based on anything this president has done, but on the decisions made by private companies before he took office. And much of this production is taking place on private land.


Even Mary Landrieu understands this.  Obama's claim is disingenuous.

Jindal spoke about this last month in attempting to explain the slow permitting process in the Gulf.   Permits are still lagging and people down south are hurting.

It's clear there is much this president could do to lower energy prices and in turn boost the American economy yet instead he has opted to prop up failing green energy companies, threaten us with cap and trade, and use increasingly stringent EPA regulations to shut down coal power plants.

That's not a national energy policy; that's an economy crippling plan sure to drive investors away and put the burden on the average American consumer.
Posted by Pat Austin Becker at 7:20 PM

Last week Beth and I drove by a Shell station a few miles from the house and said an unprintable when I looked at the sign. 3.79 a gallon for regular. What shocked me was when I saw the sign 12 hours before it was 3.59 a gallon. Twenty cents overnight.

I sometimes get into debates with younger people (I can't believe I'm talking like my parents now) who complain about oil company gouging. I explain to them I heard similar talk in the 70s and I recall the culture shock of gas going over a dollar a gallon. Some of them are really surprised when tell them of gas stations closed because there was no gas and even/odd days for gassing up (gotta love history lessons today).

And I explain to them what fixed that. In 1981 Reagan came in and deregulated the oil industry and initially the cost of gas went up. Then in six months gas prices declined and the price of oil collapsed. Why, because when people can bring a product onto the market they will and The Invisible Hand of the market will make the price acceptable to the consumer. Simple.

These twenty somethings look at me like I got two heads.

Economic education is also something to worry about.