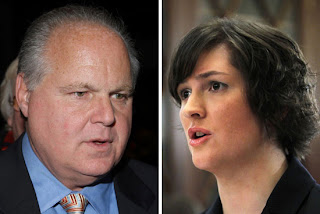 Instead of discussing the growing tensions between Iran and Israel, escalating gas prices, violence in Syria, or even the killing of Americans in Afghanistan, much of the media has spent the week talking about Sandra Fluke's sex life.

Rush Limbaugh threw even more red meat on the situation by insinuating that Ms. Fluke is, well, promiscuous:

What does it say about the college co-ed Sandra Fluke, who goes before a congressional committee and essentially says that she must be paid to have sex, what does that make her? It makes her a slut, right? It makes her a prostitute. She wants to be paid to have sex. She's having so much sex she can't afford the contraception. She wants you and me and the taxpayers to pay her to have sex. What does that make us? We're the pimps. (interruption) The johns? We would be the johns? No! We're not the johns. (interruption) Yeah, that's right. Pimp's not the right word. Okay, so she's not a slut. She's "round heeled." I take it back.


Well the media went wild with this one.  Demands for an apology flamed across the internet and Obama even picked up the phone to check on the beleaguered 30-something activist "co-ed".

And now Rush has apologized to the young lady:

For over 20 years, I have illustrated the absurd with absurdity, three hours a day, five days a week.  In this instance, I chose the wrong words in my analogy of the situation. I did not mean a personal attack on Ms. Fluke.

I think it is absolutely absurd that during these very serious political times, we are discussing personal sexual recreational activities before members of Congress. I personally do not agree that American citizens should pay for these social activities. What happened to personal responsibility and accountability? Where do we draw the line? If this is accepted as the norm, what will follow? Will we be debating if taxpayers should pay for new sneakers for all students that are interested in running to keep fit? In my monologue, I posited that it is not our business whatsoever to know what is going on in anyone's bedroom nor do I think it is a topic that should reach a Presidential level.

My choice of words was not the best, and in the attempt to be humorous, I created a national stir. I sincerely apologize to Ms. Fluke for the insulting word choices.

For my part, I don't think an apology was necessary.

I think there's a difference there. Sarah Palin did indeed suffer the brunt of many a vile attack and she was probably fair game by being a public figure.  But her daughter wasn't.  I'm not seeing the analogy there that Surber sees.

The bigger issue here, rather than Ms. Fluke's sex life, is the over-reach of the government to demand that health insurers provide coverage for contraceptives and abortifacients.

Who cares how much sex Sandra Fluke has?  I certainly don't and I don't care how much sex her fellow "co-eds" have, either.  I think Rush's main point was to call attention to the lack of personal responsibility and  nanny-state government.  Ms. Fluke threw herself into the forum of public discussion by making her sex life public.

No apology needed.
Posted by Pat Austin Becker at 5:32 PM

None was needed. And seeing Carbonite saw fit to drop Limbaugh after years of advertising on his show althouh it continues to be advertise on Aed Schultz ("Laura Ingraham, that right wing slut!") I figure they don't need my business.

Agreed, Pat. I'm actually a little surprised that Rush went that far with an apology.

But, he's a big boy and knows what he's doing.

I truly find it hilarious that a woman can afford tuition, and not the pill. Priorities, I guess...