Should Rick Santorum Quit the Race? 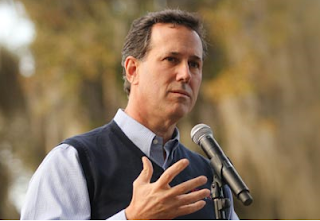 Pressure is mounting for Rick Santorum to quit the race; I can't figure out why nobody is calling on Gingrich to quit the race.  Seems to me Santorum is doing better than Gingrich in the overall count so why isn't the establishment calling for Newt to bail?

He lost the Illinois primary badly to Mitt Romney on Tuesday and, in the process, fell 300 delegates behind the former Massachusetts governor. And, adding insult to injury, former Florida governor Jeb Bush finally decided to wade into the presidential race on behalf of Romney on Wednesday, a signal to the Republican political world that primary race is at an end.


The story goes on to quote such luminaries as Bob Dole, Steve Schmidt and Haley Barbour who both think Santorum's time is nigh.

“If Santorum runs a principled campaign and then concedes graciously then he has a big future ahead,” said Steve Schmidt, who managed McCain’s 2008 presidential campaign. “If he runs a character campaign attacking Romney, then Santorum’s future is more limited.”

“I’d argue Santorum should start winding it down,” said Henry Barbour, a Mississippi Republican National Committeeman and Romney supporter. “That would preserve the most options for him — serving in a Romney presidency officially or unofficially or possibly running again one day.”


Where are the calls for Newt to get out?  Last I checked, he was in third place.

The Louisiana primary is Saturday and Santorum looks to be in pretty good shape down here.  Rasmussen reports Santorum has a 12 point lead over Romney and Newt is a "distant third."

Santorum's schedule shows he will be in Monroe tomorrow at 10 a.m., in Shreveport at the Holiday Inn downtown at 1:15, and then he's off to Pineville for a 7 p.m. appearance.

Stacy McCain is on the road, somewhere in Mississippi when we spoke this afternoon, and headed toward Baton Rouge.  He's going to stop in at the Monroe event then head over to SIGIS-land to cover the Santorum events.  We have tentative plans to get together tomorrow afternoon, schedules permitting.

As for the Romney camp, they've finally announced a public appearance in addition to the invitation-only fundraiser he will attend at The Petroleum Club:

Romney is scheduled to hold an energy event at QEP Resources at 12202 Harts Island Road in Shreveport at 2:40 p.m, according to a media release from his campaign. The meeting is free and open to the public.  Romney is also scheduled to attend a fundraiser on Friday, the day before the primary, at the Petroleum Club in downtown Shreveport. General attendance will cost supporters $1,000 per person or $2,500 per person to attend the VIP photo reception.


Check back for updates.
Posted by Pat Austin Becker at 6:16 PM

No one should quit. It's definitely interesting, although I don't think Romney can be stopped. He's halfway there in delegate count and if you look at the primaries that are left, he will rack up a bunch more.
Even if it goes to a brokered convention (what we used to call the nominating convention!), I believe he will prevail.
There will be some good cabinets seats and a vice-presidency at play however.

Okay, I'll help you out; Newt should quit the race. I remember 1998 very well. He should never have been in the race and, at this point, he should quit.

After Santorum says that Obama is better than Romney he has proven that he is not worthy of anyone's vote. That is the most idiotic statement I have ever heard a candidate make. Santorum acts like a spoiled child that doesn't get his way. BYE RICK.

I think Ollie hit the nail on the head. That was a stupid statement to make.

I think Ollie hit the nail on the head. That was a stupid statement to make.

"Seems to me Santorum is doing better than Gingrich in the overall count so why isn't the establishment calling for Newt to bail?"

The [Romney backing] GOP Establishment views Rick as a bigger threat to their candidate than is Newt. If Newt were rising, they would be calling on him to bail, too.

Just saw Rick Santorum at the Holiday Inn in Shreveport. I took my teenaged daughter, who will be able to vote for the first time this year. No I don't believe Santorum should drop out of the race. As a Consrvative Republican, I like what he stands for, and think he should keep up the good fight.

Santorum has become a loose cannon and detrimental to the GOP. Time to quit, Rick. You've forgotten the mission.