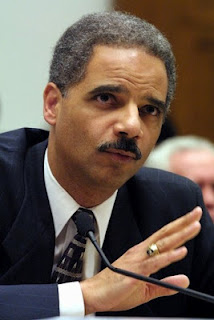 Adding insult to injury to Brian Terry's family, Eric Holder is claiming that the search for justice and accountability in the Fast and Furious debacle is simply a political tactic designed to embarrass Obama:

In his first interview since Thursday’s vote, Holder said lawmakers have used an investigation of a botched gun-tracking operation as a way to seek retribution against the Justice Department for its policies on a host of issues, including immigration, voting rights and gay marriage. He said the chairman of the committee leading the inquiry, Rep. Darrell Issa (R-Calif.), is engaging in political theater as the Justice Department tries to focus on public safety.


This is an incredible thing to say.  Eric Holder put guns in the hands of Mexican drug cartels and now he's worried about public safety?

One border patrol agent is dead.  One ICE agent is dead.  Hundreds of Mexican citizens are dead because of this operation.  And now Holder is suddenly worried about the "focus on public safety"?    Doesn't it seem that a conscientious AG would want to get to the bottom of this instead of stonewalling?

The only thing this investigation has to do with Barack Obama is what he knew, when he knew it, and what's in those documents he claimed Executive Privilege over.

It is well past time for Holder to resign.

Facts on the Fast and Furious investigation can be found here.

This has to be the most corrupt, incompetent, dishonest administrations that has ever governed our country. I heard this morning on Fox News that 41% of the folks have no idea how the supreme court ruled on Obamacare last week. Those uninformed people are easily led by what they hear from places like MSNBC. I hope there is not enough of them to reelect this idiot. This is the first time in my life that I feel more threatened by my own leaders than our enemies.

I can't say this any kinder. Holder and his boss are pieces of shit!!!!!