Take a Trip to Oktoberfest 2012 at Barksdale Air Force Base 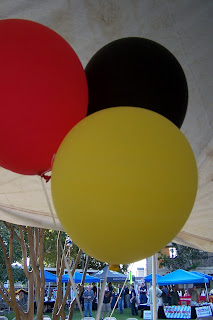 Oktoberfest 2012 is in the books and a grand time was had by all!

This was the fifth year Barksdale Air Force Base has put on an Oktoberfest celebration and each year gets better and better.  The first year was a valiant effort but it was a starting point; that year there weren't enough beer taps and the lines were insanely long and they ran out of beer very early in the evening.

This year there were sixteen beer taps with several types of beer from which to choose.  The food was inside the Club this year and was even better than last year.  They sold over 1,200 advance tickets and I have no idea how many people just walked up.

It's all for good cause - Operation Bright Holiday which sends Airmen home for the holidays.  The goal this year was to send 35 Airmen home.  All the proceeds and whatever was stuffed into the tip jars went to the cause.

As usual, Steve and I were among the first to arrive.  We staked out a good seat near the front at one of the long tables.  The band was AlpenMusikanten who returned for the fifth year in a row.

Steve is hard at work folding my new Oktoberfest t-shirt: 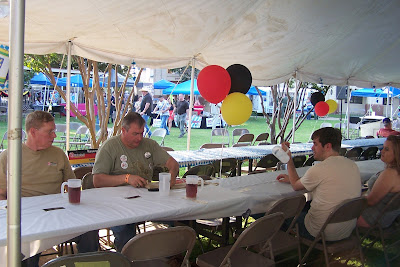 It wasn't long before lines began to form at the beer taps: 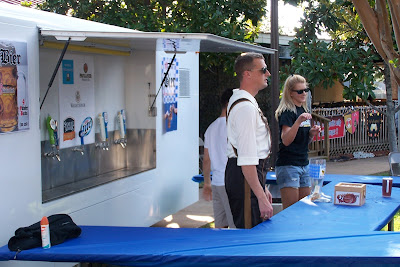 You had to have OktoberBucks to buy beer: 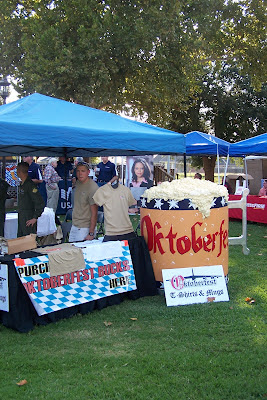 I walked around and looked at the shields for the decorated shield contest: 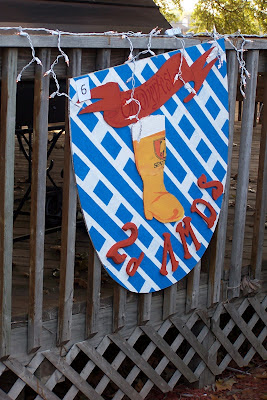 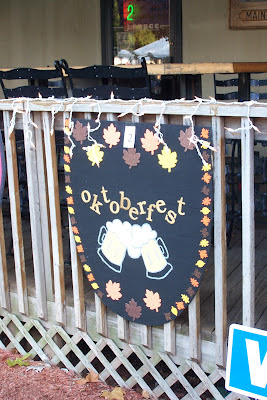 As I said, the food was inside this year, spread out beautifully in the Club.  In the first year there was one long buffet table and two lines, one on each side.  You can see they've figured out a better way: 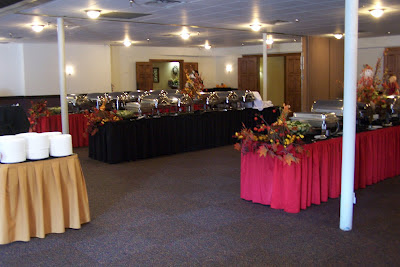 There were four tables this time and another one for the kids with hot dogs and such.  The menu for adults consisted of sliced cucumbers, German potato salad, bratwurst, schnitzel, and saurkraut with apples.  Various rolls and bread choices were offered as well as big, salty pretzels.  German chocolate cake was for dessert: 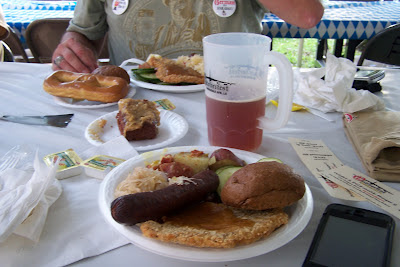 It's always interesting to see who turns out for these things; I love to people watch.  This couple was sitting near us and they seemed to be having a grand time all evening: 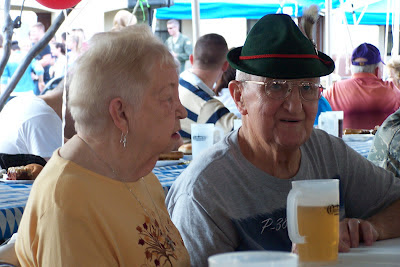 After dinner Steve and I had our annual Oktoberfest picture made... 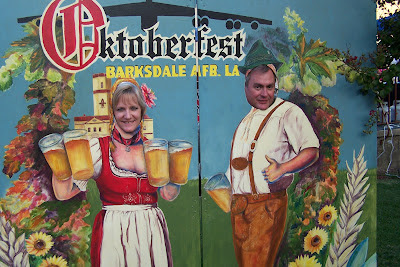 ...and then I saw my friend Rose who was giving out the Oktoberfest mugs to each ticket holder: 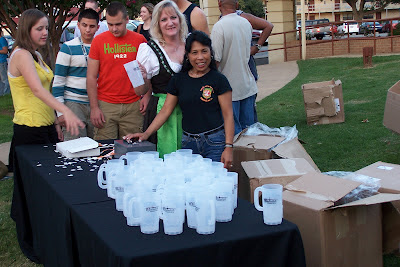 I took a couple of shots of the growing crowd before it got dark: 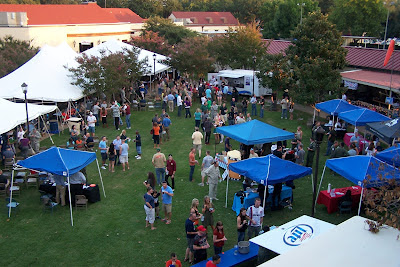 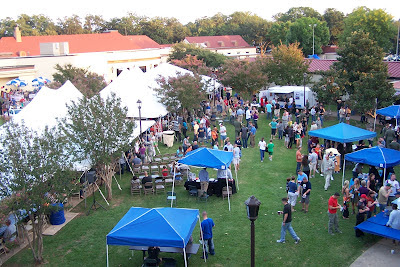 Each year they have a costume contest and call up everyone who dressed up to participate.  I won it for the last two years (wearing a skimpy Oktoberfest costume!) but this year I wanted to wear something more authentic.  Besides, at my age I started to feel sort of silly in a tiny costume meant for someone much thinner and younger!  So, I ordered a really pretty dirndl and was much more comfortable.  However, I lost this year.  To a keg.  The winner this year was a guy dressed up like a keg - and it really pumped beer!  Heck, even I voted for the keg; it was great! 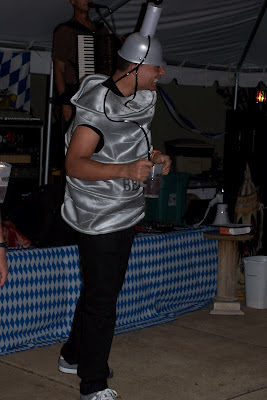 AlpenMusikanten is very big on audience participation so I was drafted to participate in the Guacamole song: 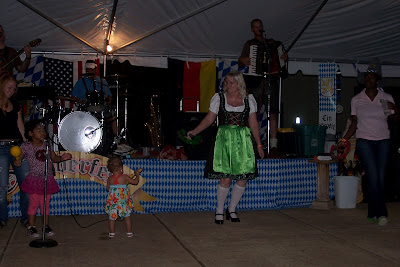 However, I could not be persuaded to participate in the yard drinking contest: 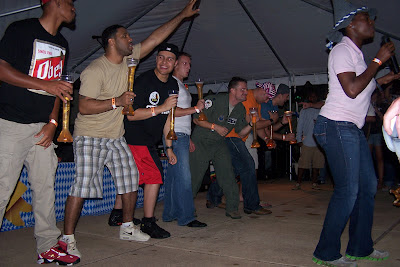 There weren't any female entrants in that contest this year although a girl did win in last year. 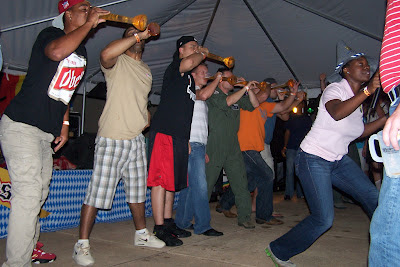 There was a keg rolling contest in the parking lot but it was dark and I didn't get any pictures of that.

We did The Hand Jive: 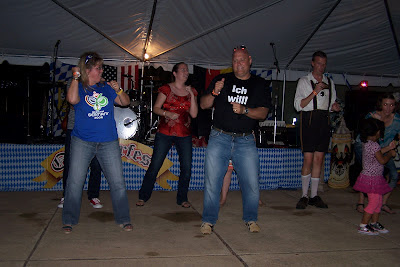 and, of course, the Thriller dance: 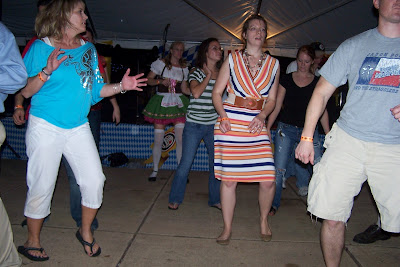 There was a Conga line: 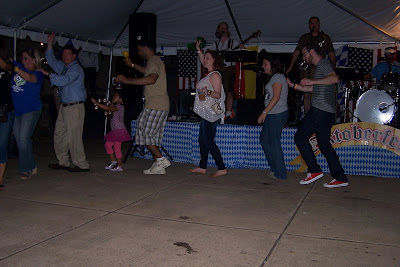 And before you knew it, it got late and people started to go home.  Steve and I always like to listen to DJ Larry Hill who keeps the fun going after the band shuts it down. 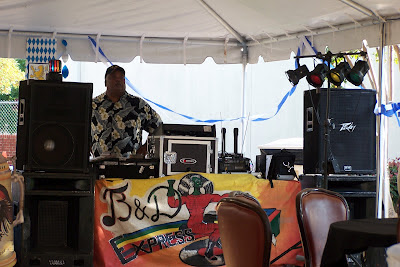 Larry gave us a shout out for being the first to come and the last to leave every year. 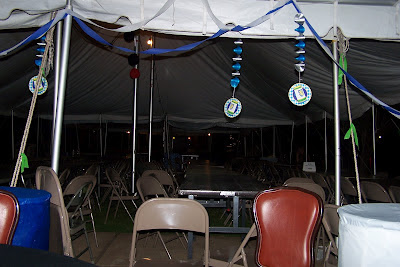 I sure hate it, but Oktoberfest is over until next year.

On a related note, here is a cool time lapse video of a day in the Hofbrau tent at the Munich Oktoberfest:

Thanks so much for attending our event!! I love seeing all the pictures, and you can believe its going to be even better this year! Can't wait!