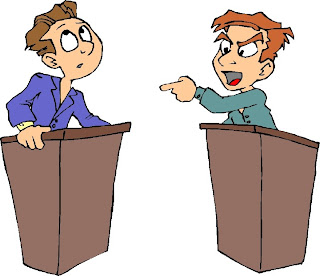 There's been a lively debate on this blog of late regarding the release of the torture memos. (I've linked it on the top of the sidebar if you want to participate without scrolling down and searching for it).

One side (mine) believes that the release of the torture memos was a bad idea; yes, much, but not all, of the information was already out, however, now our enemies know our limits. This is new information. For more on that, see this IBDEditorial.

The other side, and pardon me if I'm oversimplifying it, seems to think that the release was a good thing because now we are kinder and more benevolent and Big Bad Bush is gone and the world will love us. The US was evil in the past, we're "better than that" and now that we don't torture anymore (i.e. bother to gather intelligence), the terrorists will think twice about killing us.

On the talk shows yesterday, Michael Hayden reaffirmed his WSJ piece by saying:

"What we have described for our enemies in the midst of a war are the outer limits that any American would ever go to in terms of interrogating an al Qaeda terrorist. That's very valuable information," Hayden said during an appearance on "Fox News Sunday."

"By taking [certain] techniques off the table, we have made it more difficult -- in a whole host of circumstances I can imagine -- for CIA officers to defend the nation," he said.

An article by Con Coughlin of the Telegraph recognzies the release of the memos for what it is:

"But a change of leadership at the White House does not mean the world has suddenly become a safer place. Al-Qaeda is still devising plots, the Taliban continues to murder coalition forces and rogue states such as North Korea, Syria and Iran persist with efforts to acquire weapons of mass destruction while supporting Islamist terror groups.

So Mr Obama must take care when he attempts to score cheap political points on national security issues, as he did last week with his unnecessary decision to release previously classified details of the legal opinions authorising the use of the extreme interrogation techniques – torture, to you and me – that were drawn up by the Bush administration."
Then this from Brietbart:

But Obama is outpacing even Gorbachev. After just three months in power, the new American leader has, among many other things:

—Admitted to Europeans that America deserves at least part of the blame for the world's financial crisis because it did not regulate high-flying and greedy Wall Street gamblers.

—Told the Russians he wants to reset relations that fell to Cold War-style levels under his predecessor, George W. Bush

—Asked NATO for more help in the fight in Afghanistan, and, not getting much, did not castigate alliance partners.

—Lifted some restrictions on Cuban Americans' travel to their communist homeland and eased rules on sending wages back to families there.

—Shook hands with, more than once, and accepted a book from Hugo Chavez the virulently anti-American leader of oil-rich Venezuela

—Said America's appetite for illegal drugs and its lax control of the flow of guns and cash to Mexico were partly to blame for the drug-lord-inspired violence that is rattling the southern U.S. neighbor.

I guess the Obama Doctrine is shaping up.
Posted by Pat Austin Becker at 6:29 AM