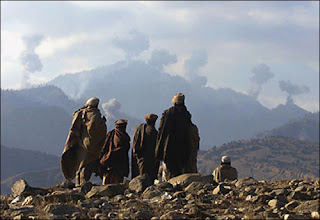 I don't even know what to say on this anymore. We're one step closer to adopting seven Chinese Uighur terrorists from Gitmo into the United States. It alternately depresses and enrages me.

Via Hot Air, and according to the LATimes, "There are 17 Uighurs ... at Guantanamo. A U.S. official familiar with the discussions over their release said that as many as seven could be resettled in the U.S., possibly in two or more small groups. Officials have not said where in the United States they might live. But many Uighur immigrants from China live in Washington's Virginia suburbs, and advocates have urged that the detainees be resettled near people who speak their language and are familiar with their customs."

Remember, these guys were picked up in Afghanistan and had trained at the Tora Bora al Qaeda training camps. They were undergoing terrorist training, by their own admission, so they could return to China and fight for an independent Uighur Islamic nation there.

These guys are such volatile characters that they smashed their big screen television at Gitmo when they saw a woman with bare arms at a soccer game:

"But the TV privileges underscored potential difficulties to come, according to one current and one former U.S. official. Not long after being granted access to TV, some of the Uighurs were watching a soccer game. When a woman with bare arms was shown on the screen, one of the group grabbed the television and threw it to the ground, according to the officials."

Are these the kind of neighbors you want?

And pardon me for asking the obvious, but why in the world are we going to import terrorists into the country? There is no case to be made that they are not terrorists. If you're picked in in an al Qaeda training camp, it's a safe assumption that you are a terrorist. "Where's your sign?"

And when you admit you were training to return to your home country in order to overthrow the government in order to replace it with another faction, you're probably a terrorist.

And what happens to them when we get them here? Will they be monitored? Given a financial settlement? Health care? How long will they stay? Will they learn the language? Get jobs? Become productive citizens? Have civil rights that we'll later be accused somehow of violating?

Taken in combination with the events of the past week with the release of the OLC memos, and the impending release of 44 prisoner abuse photos, we're getting a pretty clear picture of a much weaker national security situation than was the case on November 3. It's not a pretty picture and it's damn depressing, really.


Related Posts:
Overruling Urbina - One for the Good Guys
The Chinese Uighurs