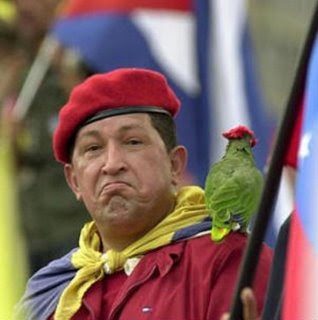 With regard to Hugo Chavez it seems that once again Obama misses the point. When reporters pointed out that he was being criticized for shaking hands with Chavez, Obama replied:

"Venezuela is a country whose defense budget is probably 1/600th of the United States’. They own Citgo. It’s unlikely that as a consequence of me shaking hands or having a polite conversation with Mr. Chavez that we are endangering the strategic interests of the United States. I don’t think anybody can find any evidence that that would do so. Even within this imaginative crowd, I think you would be hard-pressed to paint a scenario in which U.S. interests would be damaged as a consequence of us having a more constructive relationship with Venezuela."

Obama remains locked into his narrow focus of the world. It's not so much that we are worried about the "defense budget" of Venezuela, even though that in itself is debatable because of its allies. The larger issue here seems to be that Obama is providing legitimacy to this thuggish terrorist by his "polite conversation" and "shaking hands."

Granted, in some situations it would be worse to rudely pull back and refuse to shake an offered hand, but in this case it was reported that Obama "sought out" Mr. Chavez, crossing the crowded room to get to him. Was that really necessary?

Chavez uses his government to protect FARC terrorists. Fuerzas Armadas Revolucionarias de Colombia (FARC), is one of the deadliest and largest terrorist organizations in the world. In 2005, The Weekly Standard described FARC this way:

"Founded as the armed wing of the Colombian Communist party, this 16,000-strong terrorist force recruits children and funds its activities with billions of dollars collected as taxes on the cocaine trade. The group's explicit objective is to take Colombia by force. In pursuing its mission, FARC terrorists have kidnapped, extorted, and executed thousands of innocent civilians, bombed buildings, assassinated hundreds of political leaders, and, with two other local terrorist organizations, have turned Colombia into one of the most violent and dangerous countries in the world. All in all, FARC has caused the deaths of more than 100,000 people.

"The prominent FARC leader Olga Marin, for example, spoke on the floor of Venezuela's National Assembly in the summer of 2000, praising Hugo Chavez as a hero of the rebel movement and thanking the Venezuelan government for its "support."

After the 9/11 attacks, Chavez said,' "The United States brought the attacks upon itself, for their arrogant imperialist foreign policy.' Chavez also described the U.S. military response to bin Laden as 'terrorism,' claiming that he saw no difference between the invasion of Afghanistan and the September 11 terrorist attacks. "

Chavez considered himself a "brother" and "partner" of Saddam Hussein. He maintains close ties with Libya and Iran.

In 2003, Thor Halvorssen, writing for The Weekly Standard, said in response to a complaint by 16 congressmen, including Barney Frank and John Conyers, who complained that the United States was not adequately supporting Chavez against opposition:

"It is unthinkable that congressmen who enjoy access to detailed intelligence reports are willing so blithely to disregard the Chavez government's track record on matters that directly affect the national security of the United States. "

Indeed. It is equally unthinkable that the United States would legitimize or recognize a terrorist regime such as that of Chavez. It is even more unthinkable that Obama would not recognize that error. It again goes to show Obama's narrow view of history which is quite dangerous.

(H/T: The Plum Line and Memeorandum)

Thanks Prof. Jacobson for the Post of the Day spot!

Venezuela has replaced Iraq in the Axis of Evil. Does that make me a Right Wing Extremist?

Hmm, Vegas, maybe. Are you a vet? If so, you definitely are.