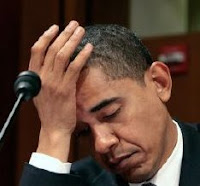 It appears that our friends in the UK are not impressed with "President Pantywaist."

"President Pantywaist is hopping mad and he has a strategy to cut Kim down to size: he is going to slice $1.4bn off America's missile defence programme, presumably on the calculation that Kim would feel it unsporting to hit a sitting duck, so that will spoil his fun."

"Watch out, France and Co, there is a new surrender monkey on the block and, over the next four years, he will spectacularly sell out the interests of the West with every kind of liberal-delusionist initiative on nuclear disarmament and sitting down to negotiate with any power freak who wants to buy time to get a good ICBM fix on San Francisco, or wherever. If you thought the world was a tad unsafe with Dubya around, just wait until President Pantywaist gets into his stride."

Ouch. And I thought all we had to worry about was a few Tea Parties.

Hi, it's a very great blog.
I could tell how much efforts you've taken on it.
Keep doing!

This blog is proof that Americans need to go to the internet and read what overseas media is actually writing about BHO. The American media put BHO in office, and they'll be damned if they're going to let him fail, regardless of his failures.

Some UK media outlets are telling what the real feeling for BHO, and it's not fluff.
I don't know what this guy is thinking, and it's proof he doesn't have a clue.

When I was 18, and in basic training, I understood one of the concept that kept the U.S. safe from Soviet aggression. It was called MAD, Mutually Assured Destruction.

MAD was understood by both sides (Soviets and the U.S.) that we had enough firepower to destroy each other 100 times over, and it kept each other at bay.)

MAD kept the Soviets from pushing their armies from rushing through the Fulda Gap in Central Germany and taking over Western Europe.

Now we are dealing with rouge elements of civilization, who cares nothing about anyone except themselves, and these people are crazy enough to use what they have to get what they want.

Just like a street level gangbanger who gets a gun to get "respect", crazy world leaders get nuclear tipped missles.

A street level gangbanger is crazy enough to blow someone away to get respect...

Well, Barry, the world scene isn't some neighborhood in Chicago.
So, if you can intimidate legitimate businessmen in Chicago, why can't you pretend to intimidate the enemies of this country.

What sucks is ... I was old enough to understand what was happening with President Carter at the time and yet I've resisted the comparisons. There's no denying what "is" is now.

@Bride,
I was too, and you are correct. I've been following the Saberi story and have been reminded of the hostage situation with that one also.