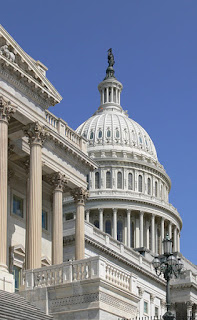 According to the Huffington Post, BHO is "thin-skinned" and hurt that the GOP did not support his outrageous spending bill earlier this year. The GOP refused to appropriately bow down to the emperor and respond to his grand efforts at bipartisanship. Payback time.

"A GOP source familiar with the meeting said that the president was extremely sensitive -- even "thin-skinned" -- to the fact that the stimulus bill received no GOP votes in the House. He continually brought it up throughout the meeting.

"Obama also offered payback for that goose egg. A major overhaul of the health care system, he told the Republican leadership, would be done using a legislative process known as reconciliation, meaning that the GOP won't be able to filibuster it.

"Congress has until October 15 to pass health care or student lending reform under the normal process. If it doesn't, reconciliation can be used to eliminate the 60-vote requirement."

No dissent is allowed, people! You vote my way or you don't vote at all!

Seriously, health care reform is much too serious an issue for the Dems to hijack and ram through Congress. Senate Minority Leader Mitch McConnell said,

"Fast-tracking a major legislative overhaul such as health care reform or a new national energy tax without the benefit of a full and transparent debate does a disservice to the American people. And it would make it absolutely clear they intend to carry out their plans on a purely partisan basis."

ObamaCare is an issue that NEEDS bipartisan input. He's shooting for a drastic overhaul of the healthcare system, much like the European system where health care is rationed. I've written about it here and here. Many, many Americans are as yet uninformed as to what is coming. To ram it through Congress via reconciliation is not the way to go.

It is still possible that a bipartisan agreement on health care reform could be reached before October 15 and reconciliation would not be used. But it's a heavy-handed threat that hangs over the entire process and it shows Obama's Chicago style politics.

Not all Democrats are supportive of using reconciliation as it does not come without risks to their objectives. The Commonwealth Fund has an excellent article on the pitfalls involved suggesting that:

"Some of the most significant parts of potential health care legislation could be killed under a Senate rule that requires provisions in reconciliation bills to be related to tax or spending decisions, not major unrelated policy changes with little budgetary impact. The vulnerable provisions include some of Democrats' highest priorities, such as requiring insurers to offer health care to everyone, regardless of preexisting conditions and without charging patients different rates based on their health. Another provision that could face a challenge would require all individuals to buy insurance. Facing slightly less risk is a proposal to require all employers to offer or pay for coverage for their workers.

George W. Bush used reconciliation to get certain tax cuts through. The process is not unique to Obama. I'm not defending Bush's use of the process either. It's not the way Americans want to see business done in Congress and it goes against what Obama campaigned on. He promised bipartisanship and transparency, both of which reconciliation negates.

More to the point in this case is that Obama is using it as a threat - 'you didn't do what I wanted then so I'm not going to do what you want now'. It reminds me of his "I won" reminder.

All in all, it's petty politics whether it is a Republican or a Democrat using it, and it's not in the best interest of the country. In the case of health care, as the Commonwealth article points out, Max Baucus says "The resulting bill would end up looking like "Swiss cheese."

(Welcome Sheeples readers! Thanks, Sheeples, for the link!)
Posted by Pat Austin Becker at 9:34 AM