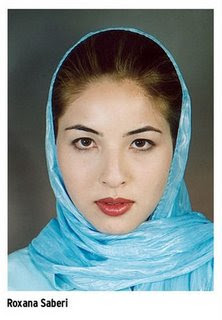 Update: In a statement, Hillary Clinton said "that she's 'deeply disappointed' by an Iranian court's conviction on Saturday of Iranian-American journalist Roxana Saberi on espionage charges, and promised to "vigorously raise our concerns to the Iranian government."

Roxana Saberi has been tried, behind closed doors, and sentenced to eight years in prison in Iran.

No comment yet from our State Department or president who was last seen shaking hands with terrorist-sponsor Hugh Chavez.

Iran does not appear to be interested in the good will and mutual trust that Obama spoke of in his New Year video message; a face-saving option for them would be to immediately deport Saberi after her conviction, but instead she will spend eight years in notorious Evin prison which does not have a favorable record.

According to CPJ (Committee to Protect Journalists), "at least two journalists have died ‎there in the last six years amid circumstances that have not been fully explained. Omidreza Mirsayafi, a blogger serving ‎a 30-month sentence on a charge of insulting ‎religious figures, died at the prison in March under mysterious circumstances.‎ In July 2003, Iranian-Canadian photojournalist Zahra Kazemi died from a brain hemorrhage that resulted from a beating at Evin Prison. An intelligence agent charged in the killing was acquitted after a flawed trial. Kazemi had been jailed because she took photographs outside the prison."

's press freedom record is one of the poorest in the region. In addition to Saberi, at least five editors ‎and writers are currently imprisoned in , CPJ research shows.

It has been suggested that Iran is using this case as a tool for a prisoner exchange for Iranian political prisoners. Whatever the case, Saberi is an American citizen and the State Department should use whatever means necessary to help her.

It is unconscionable that she should be left to rot in an Iranian prison for eight years, especially given the horrific track record of Iran with female prisoners.

The Case of Roxana Saberi
Posted by Pat Austin Becker at 8:36 AM

Thw White House responded by saying Obama was "deeply disappointed" by the conviction. Wow! Not since he called Iran "unhelpful" has he taken such a strong and principled stand against despotic tyranny.