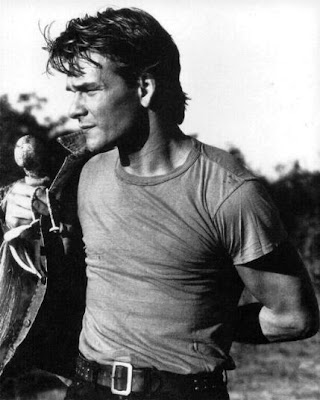 Your gratuitous Rule 5 picture this week is Patrick Swayze because I loved him as Johnny Castle and I'm praying for Patrick Swayze.

Some things you need to go read from this week:

On the torture memo release, nobody did it better than IBDEditorials (well, except maybe Mukasey and Hayden.)

A small excerpt from IBD:

"These top secrets will arm Islamist jihadists with knowledge that will be invaluable to them. Future terrorist detainees will now know, for instance, that their interrogations are under continual video surveillance to make sure no lasting medical or psychological consequences result from the techniques used. Will they now teach themselves to fake such ill effects?

Terrorists will know that when they are placed in a tiny container in "cramped confinement" it will last only "up to two hours," as a declassified memo from the Justice Department to the CIA noted. They will know that "stress positions" are used "only to induce temporary muscle fatigue" not 'severe physical pain.'"

Critical Narrative had an excellent post this week on fascism and how the word is so loosely used these days without much thought to its meaning. You must read it.

Professor William Jacobson has a fabulous smack down of The New York Times!

If you missed Robert Stacy McCain's 'Bama speech you must go watch it - priceless!

Sister Toldjah has a tiny reminder about Obama's foreign language defict, but remember, we all need to learn one (I'm covered - I speak French).

Pundette sounds off as only Pundette can on the "Tea-Bagging" story.

If you want to see gorgeous pictures and read beautifully written narrative on Japan and Guam, do NOT miss Immersion. Absolutely stunning.

And finally, Texas Rainmaker reminds us all of The Audacity of Unawareness. Be sure you read that.