On the Cuban Embargo and Sanctions 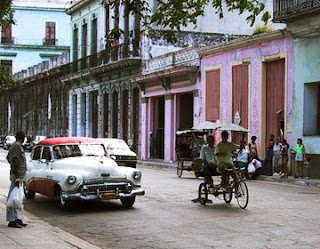 * Scroll down for updates *

One of the things we are likely to start hearing a lot about this week as the Summit of the Americas approaches is the administration's Cuba policy.

There is a lot of debate on this issue and Obama, so far, has made cautious overtures to making some changes. One of the proposed changes is calling for easing restrictions on travel to Cuba as well as removing caps on money transfers to family on the island. He has not yet called for the end to the embargo, which many say has not worked.

With regard to the embargo, Nestor Carbonell, writing for Foreign Policy, suggests that the "embargo is the only leverage the United States has to ensure a democratic transition." Yes, the Castro brothers still remain in power, but Carbonell contends that they are "exhausted and weaker." And less wealthy, I might add. Carbonell points out that the European Union lifted diplomatic sanctions against Cuba but so far human rights improvements have not occurred.

In an excellent piece for the WSJ, Maria Werlau writes:

"Sales of medical and agricultural products have been long exempt from the embargo. But Cubans are forbidden from importing those goods or owning businesses to distribute or sell them. Instead, the ruling elite enjoys privileged access to food, consumption goods and premiere medical services, while the population does without. Many pharmacies and hospitals lack even aspirin. The obligatory food ration book is pitiful and provides insufficient calories. The latest, much hyped, "reforms" consist primarily of allowing citizens to buy cell phones and enter tourist facilities. But the cost of a cell phone or one hotel night exceeds the annual wage of the average worker ($16 a month). "

In other words, the Castro regime is still fully engaged in supressing the rights and the lives of the Cuban people. So Cubans can buy cell phones now, but the cost puts them out of reach. They can buy compters, but no internet access.

One common argument is that since the end of the Cold War, Cuba is no longer a threat to anyone. Some say that the only ones being affected by the embargo and the restrictions are the Cuban people.

Carbonell reminds us that "Its biotechnology capability, developed in conjunction with Iran, and its close relationship with North Korea pose serious concerns. Cuba continues to harbor terrorists from ETA, FARC, and ELN, as well as U.S.-convicted criminals and fugitives." FARC is a particularly nasty group responsible for many Columbian kidnappings, airline hijackings, and assassinations.

With regard to the open travel issue, the general argument is that tourist dollars from Americans will help the average Cuban. What we must realize is that under the current Castro regime, the average Cuban would never receive any of that money or benefit. Go back to Werlau, who writes:

"Over two million tourists from all over the world travel there annually, including U.S.-based visitors (an estimated 1.3 million in the past 10 years). Yet strict laws still govern labor relations with the foreign sector. Workers are selected for political allegiance and must be hired from a state enterprise that retains over 90% of their wages plus all tips. The state still owns the tourist industry, so billions in revenues continue to pour straight into its coffers or into overseas bank accounts."

European and Canadian tourist dollars have not helped the Cuban people at all, but have only filled the coffers of the Castro brothers. To assume that American dollars would help any more that other tourist dollars is naive. As long as the Castro regime isolates those tourist areas and keeps regular Cubans from them, nothing will change.

In Cuba, the regime still determines where you will work, live and how much income you will receive. If you step out of line, speak to the wrong people, indicate any dissent, or attempt to buy some necessity from the black market, you will likely be imprisoned. Cuba is ranked as one of the world's most repressive countries and that has nothing to do with an American embargo or sanctions. Babalu Blog wrote this week of one restaurant that was closed for being "too successful".

The words of the CBC after their visit to Castro were especially incredible given the harsh repression of the Cuban people, which incidentally, they were forbidden to see.

"It was quite a moment to behold," Lee said, recalling her moments with Castro. “It was almost like listening to an old friend,” said Rep. Bobby Rush (D-Il.), adding that he found Castro’s home to be modest and Castro’s wife to be particularly hospitable. “In my household I told Castro he is known as the ultimate survivor,” Rush said.

I think that it is admirable that Obama wants to address the Cuban problem, and it might be an area in which he will find some success. I'm being optimistic here, but the issue involves skills he has that he could use for some good. But it can't come from America alone; he will have to engage the aid of other nations in dealing with Cuba. Throwing American dollars to Cuba will not solve the problem, it will only fuel the coffers of the already bankrupt Castro brothers.

A diplomatic engagement with them will best be achieved by a unified approach that involves other nations of the region. Cuba is a concern for the entire region, in fact, is an international concern, not just a concern for the United States.

Update 11:36 : As per NYTimes: "Obama will lift some U.S. restrictions to allow Cuban Americans to travel more freely to the communist-ruled island and send financial assistance to family members, a U.S. official said."

Update 2, 12:26: More specifics from Breibart. Also another WSJ article, which reminds us that "A significant segment of the 1.5 million Americans with relatives in Cuba are resolutely anti-Castro and oppose easing relations. In Cuba, the government has staked much of its legitimacy for nearly 50 years on casting the U.S. as an enemy and may be unwilling to make significant changes." In fact, most Cubans do not blame the American embargo on their hardship but the "internal government blockade" (Carbonell).

Update 3, 2:00: Reaction from The Hill Blog (via Memeorandum): "While increasing the amount of funds Cuban-Americans can send to their loved ones is also a welcome measure, a Cuban’s average salary is about $25 per month. The unlimited sending of dollars to Cuba will help Cuba’s National Bank in its money laundering efforts. Years ago, a Swiss bank was fined millions of dollars by the United States for processing deposits worth millions from Banco Nacional de Cuba. Havana maintains close links with narco-guerillas in South America’s mainland.

"Havana also refused to accept millions of dollars in humanitarian assistance offered by the United States last year to help thousands of Cubans affected by several killer hurricanes. The regime also confiscates medicine, food, etc. which is brought by travelers to the island, and it has broken into the US diplomatic pouch to stem the flow, among other things, of such items."

Related post: Our Old Friend Fidel
Posted by Pat Austin Becker at 9:44 AM