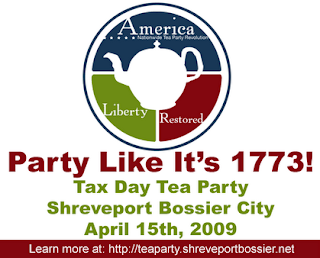 Here is the KSLA story on the Shreveport/Bossier Tea Party:

SHREVEPORT, LA (KSLA) - Fed up taxpayers are organizing "tea parties" around the country to protest bailouts and increased government spending, and arklatex taxpayers are joining the party.

Carissa Strozier is a volunteer coordinator for the Shreveport-Bossier Tea Party. "We already have over 700 people who have registered that they will be attending our event."

It will be held at the Bossier Municipal complex on April 15th, tax deadline day. Organizers are aiming for at least 1500 tea partiers to show up. "We've gotten a great response from just everyone. It didn't matter what party they're in or what walk of life they're from, they all just want to get their voice heard and that's what we're actively trying to do."

Today, Strozier is working on the signs that will be a staple at the symbolic rallies, fashioned after the famous "Boston Tea Party," the 18th Century protest that sparked the American Revolution. "We've got 'TEA,' which stands for 'Taxed Enough Already,' 'No more bailouts,' 'Repeal the pork,' things like that."

The first tea party took place in 1773, when angry colonialists dumped an entire shipload of British tea into Boston Harbor to protest taxation without representation. Today, a new kind of unrest brewing, and they're playing on that original tea party to get their message out. "It's just symbolic of what we did before," Strozier says.

The modern-day tea party is now just a week away. Tomorrow night, local organizers are holding a pre-tea party poster party at the Glenwood Village Tea Room, where owner Sharon McCullar is more than happy to share her space for the cause. "I think it's really important that we speak our minds and this is a great forum or opportunity for people to be able to do that."

A Gadsden flag bearing the "Don't Tread on Me" message is proudly displayed at the entrance to the tea room. A symbol, McCullar says, of a whole new revolution. "We are making history. This is only the beginning. This is the very first step. There are many many rallies to come.

Local Tea Parties (all are on April 15th):

Also, be sure to check out Glenn Reynolds analysis of the Tea Party movement. Incredibly, there is a great deal of trash-talk about the Tea Parties; everything from racism claims from Geraldo "There are no people of color there!" Rivera to claims that Fox News is funding it all.

I can attest that Fox News has had no contact with me whatsoever and I'm attending the Shreveport/Bossier Tea Party! What the trash-talkers can't see is that many Americans are sick and tired of wasteful spending and irresponsible representation by "leaders" in Washington who don't read bills before acting on them.

Paul Krugman wrote in the NYTimes today that"

"They’re AstroTurf (fake grass roots) events, manufactured by the usual suspects. In particular, a key role is being played by FreedomWorks, an organization run by Richard Armey, the former House majority leader, and supported by the usual group of right-wing billionaires. And the parties are, of course, being promoted heavily by Fox News."

Professor William Jacobson counteracts this in his great post today by saying:

"The disparate groups involved, the great variation from location-to-location, and the sometimes disorganized nature of the protests demonstrate the genuine nature of the movement. The fact that some have lent a promotional hand doesn't take away from this. The mainstream media practically elected Obama through its over-the-top cheerleading coverage and refusal to ask hard questions. And Media Matters and other liberal organizations are extremely well funded in their efforts, far more so than the Tea Party movement. Nothing any conservative organization is doing to help the Tea Parties even comes close."

So yes, Fox News is covering the event, more than can be said for most of the main stream media, but they have not organized it.

In Shreveport/Bossier, we're ready! If you're coming, remember, we'll be at the Civic Center on Benton Road at 5 pm, and organizers (NOT Fox News!) are asking you to bring signs and canned goods. Bring your camera, too, because it's sure to be a memorable event.

(Thanks to Legal Insurrection for the link!)
Posted by Pat Austin Becker at 7:14 PM