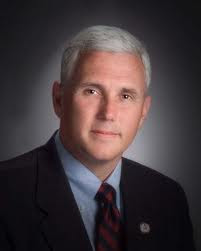 I might have to do some more research on Mike Pence.  Is he running in 2012?

American Specator has text of Pence's speech last night at Hillsdale College.  It's a must read.  Here's a teaser:

The presidency has run off the rails. It begs a new clarity, a new discipline, and a new president. The president is not our teacher, our tutor, our guide or ruler. He does not command us, we command him. We serve neither him nor his vision. It is not his job or his prerogative to redefine custom, law and beliefs; to appropriate industries; to seize the country, as it were, by the shoulders or by the throat so as to impose by force of theatrical charisma his justice upon 300 million others. It is neither his job nor his prerogative to shift the power of decision away from them, and to him and the acolytes of his choosing.

The speech is loaded with good stuff.  Is he running?

Posted by Pat Austin Becker at 5:37 AM

WOW! Eloquent and forceful. I love it.

As in every occupation, there are good and bad. This man, right now, does impress me.

I always thought he'd run -- and I think he'd make an excellent president.

I watched some of his speech to the Values group the other day. The part I find most disturbing is that Mr. Pence supports a total repeal of Roe vs. Wade and the abolition of abortion for any reason. This means you get pregnant by your father, a violent rape, you are required to bear the child.
Mr. Spence is very impressive and I think he has a great grasp of the politics in the election of a president. But like many he speaks of the sins only of his opposition. The respect for the Constitution? Mr. Bush did more to de-legitimatize the Constitution than any since our founding fathers wrote it.

I too hope he runs. At least if he does the conservative wing of the GOP will be the one running.

Charlene said, "Mr. Bush did more to de-legitimatize the Constitution than any since our founding fathers wrote it."

Charlene, Are you kidding me? And you support the person who is now president? A man who has in many ways possible taken the U. S. Constitution and virtually wiped his ass with it and flushed it down the toilet.

Cool, looks like more material for my classes to use.

Pat, I don't know if Pence will run. But, I have been saying for years that the strength of the Republican Party is in The House.

Guys like Pence, Flake, McCotter, and really a dozen others in The House are eloquent, forceful, and extremely capable of destroying any liberal argument with FACTS.

Charlene is right about one thing. If Pence (or one of his type) does get the nomination, it will be the true conservative message up for a vote.

And, that's what the public needs...a clear cut choice. Then we'll see where we really are as a nation.