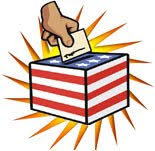 Update: And Corzine has just given his concession speech! Hooray for Christie's victory! The NY-23 is still really close right now and it's nerve wracking. Stacy McCain is reporting problems with voting machines in two counties - about 11 machines. Overall though, either way, it's been a good night for conservatives.

Election night - I'm settled in with the slower-than-Christmas-I-hate-Vista laptop watching the returns. McDonnell has already been declared in Virginia. No shocker there but good news nontheless.

There's talk all over the internet, blogosphere and television as to whether these elections are a referendum on Obama or not. I don't know about that; that's really not my area of expertise, but I do believe that it is telling that the New Jersey race, for example, is expected to be as close as it is. By all previous expectations and performance, the Democrat should have had no problem there. That Christie has made it such a contest may not be a referendum on Obama but certainly shows how voters are beginning to view the shenanigans coming out of Washington.

So much for the right wing fringe!

Simply put, anyone who spins this election story as having nothing to do with a referendum on Democrats or the massive spending coming out of Congress right now is just silly.

According to exit polls, the direction Obama has taken this country and the uneasyness about all the money spent with no improvements to the economy seem to be costing Democrats tonight.

I know everyone had themselves invested in NY 23 but really New Jersey is the massive win we never expected. After all Obama invested in that election, there have to be tears in that White House tonight.