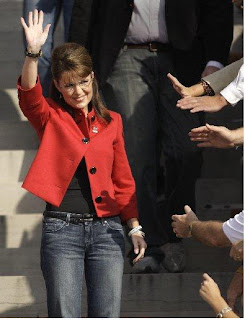 Oh my. Frank Rich takes off on Palin today. I've avoided writing about Palinophobia and the Palinopalooza currently raging in the blogosphere right now because others are doing such a great job. And, well, Andrew Sullivan. Enough said.

But Frank Rich is pushing me over the edge.

He admits to having read the book, which is something. I've got the book but I haven't read it yet; I'm still into this Ayn Rand biography and I don't want to start another book until I finish it.

After Rich criticizes Liz Cheney and Ana Marie Cox for not reading the entire tome, yet daring to pronounce judgment on it, he then takes apart "little noticed" elements of the book. She was star-struck, he says, by Bono, John Voight, and Gary Sinise, among others. I'm not sure this so so surprising, much less revealing, about Palin, but Rich thinks so.

He also finds it "equally revealing" that she doesn't mention Levi Johnston. Gosh dang, Frank, Levi has trashed her family from here to yon, embarrassed her daughter, threatened Palin, stripped naked, and basically revealed himself to be the trash that he is, so why would she waste any ink on him? Rich says Johnston is "persona non grata now that he’s taking off his campaign wardrobe." There's a little more to it than that, but Rich doesn't really care.

Rich says of Palin, "Even by the standard of politicians, this is a woman with an outsized ego." He makes this pronouncement after a passage in which he tells of her coming to terms with the birth of her Down's syndrome baby. Refresh my memory...when was the last column Rich wrote on Obama's "outsized ego"? Did I miss it? Because surely there is one. Isn't there?

No, this is what really bugs Rich, and the left, about Palin. He says "She is the pit bull in the china shop of American politics, and she can do what she wants, on her own timeline, all the while raking in the big bucks she couldn’t as a sitting governor. No one, least of all her own political party, can control her."

Then comes the race card. It's always there. Rich writes of Palin's fan base:

That demographic is white and non-urban: Just look at the stops and the faces on her carefully calibrated book tour. The affect is emotional — the angry air of grievance that emerged first at her campaign rallies in 2008, with their shrieked threats to Obama, and that has since resurfaced in the Hitler-fixated “tea party” movement (which she endorses in her book). It’s a politics of victimization and sloganeering with no policy solutions required beyond the conservative mantra of No Taxes.

He can't decide if she's running in 2012, if she should run, if she could win. She quotes Dick Cheney (because "dithering" is such an exclusive word it must have come only from Cheney.) "The discredited neocon hacks" who support Palin sure have a lot of work to do, he says. Rich even manages to take a shot at Lynn Vincent, which has turned into popular sport lately. So, anyone who likes Palin is probably "Hitler-fixated" and a discredited neocon hack. Got it.

Rich's muddles through whether or not Palin should run in 2012 by concluding that"no matter how much Palin tries to pass for 'center-right,' she’s unlikely to fool that vast pool of voters left, right and center who have already written her off as unqualified for the White House. The G.O.P. establishment knows this, and is frightened."

I haven't noticed Palin shooting for "center-right" but I suppose she could try if she wanted to. The GOP isn't afraid of Palin. No, I think the only one frightened of Palin is Frank Rich. And Andrew Sullivan.
Posted by Pat Austin Becker at 8:50 AM

Actually, Palin Derangement Syndrome is found among those who are pro-Palin, not anti. The most prominent example, of course, is the ex-governor herself.

in your criticism of rich's claim that palin has an outsized ego, you completely ignored why rich says he thinks she has a massive ego. it wasn't just because she wrote about "coming to terms with the birth of her Down's syndrome baby" (talk about spin!) his point is that palin wrote a letter to herself pretending to be god.

that seems like a pretty rock-solid case for big ego to me. and sure, every politician has a big ego. i think the god thing puts palin in a different class altogether.

the first commentator is mostly right. i see a lot of derangement surrounding sarah palin. quite a lot of it comes from her supporters. (although i also admit that some of her detractors are pretty nuts too. andy sullivan is absolutely bonkers when it comes to her, just as he was during the primary about hiliary clinton. sully just seems to have a problem with women in general)

in any case, keep it up! i, for one, am glad that the loony right is rallying around a figure like palin.