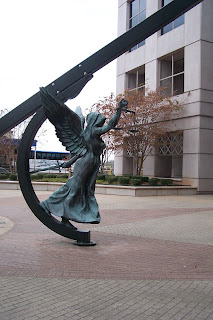 I don't even know why I'm going to watch the Senate shenanigans today because in my heart I feel like it's already a done deal, as they say, but I'm going to watch anyway. Once again I find myself embarrassed to be from Louisiana. Joseph Cao I could almost take; when he was the lone Republican in the House to vote for Obamacare, I told myself, "Well, that sucks, but he IS at least trying to represent the needs of his constituents and he does come from a democratic district. He's trying to stick to his principles." It didn't help much, but it was a small rationalization. Additionally, the measure would have passed with or without his vote.

But with Katrina-Mary Landrieu, as she is affectionately known around here, her sellout, her bribe - call it what it is - just disgusts me. She's a Democrat and is going to vote that way. That part doesn't shock me. What sickens me is first of all that she is selling her vote for $100 million. You will tell me, "Oh they all do that all the time anyway! They all make deals and sell their votes!" I know this. But then she has the temerity to tell us as late as last night that she still hasn't decided? Really? You've already crawled into bed with the devil but you haven't decided yet? We're supposed to believe that?

Word circulated a few weeks back that Katrina-Mary won't run for re-election. I wonder what sort of White House Czar job she has lined up? Because that $100 million won't go very far and eventually Louisiana, and every other state, is going to be on the hook trying to fund that huge new entitlement Congress is about to ran down our throats. There must be something else in it for her.

Disgusting. On to the happy links:

Ann Althouse has the story of a bookstore that won't even stock "Going Rogue" because their readers are "thinking people" and don't read drivel. Oh what snobs. Good lord. Donald Douglas also covers the story.

Bride of Rove has some comments about the new recommendations on pap smears and mammograms. Best takeout line? "Moral to that story is – don’t email me unless you are suicidal and need that extra shove." She cracks me up! Seriously!

Carol at No Sheeples Here does the best FMJRound Up. Ever.

It's odd how you can loathe someone you've never met, but that's how I feel about Levi Johnston. If I saw him enter the room, I'd look for an exit. Ruby Slippers has more.

I thoroughly enjoyed Stacy McCain's takedown of lizard trolls this week. I've dealt with a couple, but never so well as this.

Left Coast Rebel has a nifty depiction of the unemployment situation.

Did you know that special needs children will have their own special tax in Obamacare? Read Gateway Pundit.

Another Black Conservative points to Senator Leahy's ignorant conclusion that we "don't need to interrogate" bin Laden should he be captured. Incredible. Jimmie Bise was also watching that hearing, and has comments on Eric Holder's Very Bad Day.

Carolyn Tackett isn't losing any sleep over how the world feels about us.

There's a new blog on the block: What Would the Founding Fathers Do? Check it out!

The Daley Gator (and Michelle Malkin) are keeping up with the Democratic bribe list. Number One? Our own Katrina-Mary Landrieu.

Pundette has a preview of the Senate Shenanigans today.

Honesty in Motion is ranting!

Okay, I know I've left off some folks and I'll catch you later today or tomorrow. I've got a date with some Senators right now and need to scat.
Posted by Pat Austin Becker at 8:06 AM