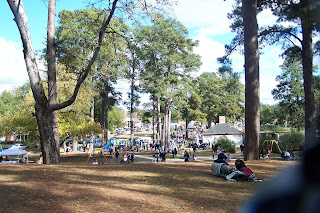 I can't linger long this morning folks; I've got to get ready to go lay in the sun in the park and listen to some funky music which will be a much needed break from the insane, and I do mean insane, news cycle this week.

If you live anywhere around here, come on down to Columbia Park and enjoy the sixth annual Highland Jazz and Blues Festival today where the fantastic New Orleans Rebirth Live Brass Band will be perform. There will be two stages (which is not always good if you want to hear both acts), including Robin & the Bluebirds, Professor Porkchop & the Dirty Dishes, A.J. Cascio & the Two-Tone Blues Band and Total Choice.

Lots of vendors will be on scene as well; everything from arts and crafts to food and beer. You can eat taco soup, chicken spaghetti, funnel cakes, turkey legs, onion rings, gumbo, sample Jamaican fare from The Burning Spear cafe, Indian food, or Italian food from The Market Street Bistro.

So, I've got to gather my blanket, a couple of lawn chairs, some cash, my camera and Steve, and get on over to the park. While I'm gone, check out some great linkage:

Start out with Jules Crittenden today who marks the forty-fourth anniversary of the first major engagement between the U.S. and North Vietnamese. An excerpt:

Two good friends, Larry Gwin and John Eade, were there with 2/7 Cav, choppered in to reinforce 1/7 Cav at LZ X-ray and then marched five miles to LZ Albany. Another friend, Joe Galloway, was a war correspodent who had attached himself to a unit he correctly anticipated would see action. Gwin (Silver Star, Purple Heart) wrote about it in Baptism: A Vietnam Memoir. He is now writing a sequel about the long, difficult process of recovering his life in the aftermath of horrific combat.

Carolyn Tackett went to the Tea Party Express event in Orlando where she had a great time, posted lots of pictures, and found Stacy McCain. Stacy has posted video from the event.

Doug Ross has a powerful post in which the punchline is: "No President -- not Lincoln, not Wilson, not Roosevelt, not Kennedy -- no President has ever granted POWs and enemy combatants the rights of U.S. citizens and the comforts of the federal criminal justice system." Amen to that.

Reaganite Republican has a great post on the the insurance mandate and whether or not it's constitutional.

Red invites you to Support The Bravest. And you should.

Professor Jacobson nearly ruined my dinner when I read this post last night. NEVER check your Google reader right after a ribeye dinner.

Pundette has the video of Rudy Giuliani going nuclear over the 9/11 terrorists coming to America. I'm right with him. Jimmie Bise has some thoughts on the subject as well. Political suicide comes to mind.

No Sheeples Here posts on Obama cleaning Republicans out of their civil service administration jobs.

Ruby Slippers has a Southpark parody of Glenn Beck.

Greg Craig is getting a new tattoo! Grandpa John has the scoop.

Wyblog writes about 12,000,000 new American citizens. All Democrats to be sure. Another Black Conservative makes note of the same story. Americans revolt!

Kiss My Gumbo has a great Armistice Day video from the events at the WWII museum in New Orleans this week.

The Daley Gator has a great round-up when you're done with mine!

Generation Patriot joins those of us who had to rant this week. So is Honesty in Motion. It's becoming a common thread and I think people have had enough. 2010 better hurry up.

Left Coast Rebel has had enough of Oba Mao.

And here's what I'm listening to today - meet Professor Porkchop:

Hutch: This one is for you:

Posted by Pat Austin Becker at 8:39 AM