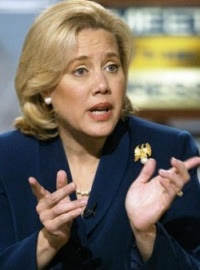 Via The Dead Pelican, this is probably Mary's payoff. Harry Reid needs her vote to proceed on his ridiculous health care bill and this might be what tips her scales:

On page 432 of the Reid bill, there is a section increasing federal Medicaid subsidies for “certain states recovering from a major disaster.” The section spends two pages defining which “states” would qualify, saying, among other things, that it would be states that “during the preceding 7 fiscal years” have been declared a “major disaster area.”

I am told the section applies to exactly one state: Louisiana, the home of moderate Democrat Mary Landrieu, who has been playing hard to get on the health care bill.

You might remember this post from Landrieu's town hall last month in Lafayette in which she said she would vote for cloture and it appears she will get her chance on Saturday.

I would suggest that everyone, EVERYONE, call her office and register your opinion. Even if you don't live in Louisiana, you still live in America. Her contact numbers are:

All contact information is here.
Email is here.
Posted by Pat Austin Becker at 6:25 PM

Only in government do you get to bribe a politician with someone else's money.

AUGH I KNEW IT! That dyed in the wool Benedict Arnold!! Gah!!! Count on ME-ry Landrieu for nothing!

Just yesterday I got an email from Senator Landrieu saying she is not playing the game in Washington, and today this -- what a, um, misleader. I emailed her my response yesterday to her densely packed 2 page mush she sent me, -- and now I have to call her out on it through another email (well, using her webform) Shameless and shameful. Vote her out.

Ms. Landrieu doesn't want to hear from her constituents today. I just dropped by her BR regional office with my two year old in tow after getting a busy signal all morning. I was turned away by security. The excuse? Nobodcy was in the office. He told me only one person was working today and that she left for lunch at 11:00 am and would not be back until 12:30 pm. UNBELIEVABLE.

Apparently Ms. Landrieu is not interested in hearing from her constituents today. After getting a busy signal all morning, I visited her regional office here in Baton Rouge (with my 2-yr-old in tow). I was turned away by security. The reason? There is only one person working in her office today and she left for lunch at 11:00 am and would not be back until after 12:30 pm. UNBELIEVABLE!