"It is a presidential decision—one about the hard, ever-present trade-off between civil liberties and national security." 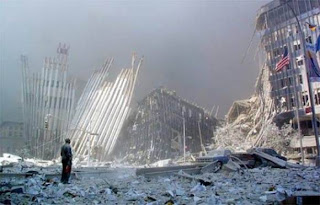 Update: Memeorandum has a great thread going on this topic.

I wrote yesterday on the debacle that having the KSM trial in New York would be. Today, in the Wall Street Journal, former Justice Department official John Yoo has an excellent piece on the intelligence bonanza the trial will be for al Qaeda. His main point: "The treatment of the 9/11 attacks as a criminal matter rather than as an act of war will cripple American efforts to fight terrorism."

This decision takes us back to a pre-9/11 mindset; you'll hear that phrase over and over, and it will probably lose its meaning as things do when you hear them too often. But stop and think about this one. We're treating an act of war as a criminal matter now.

As I said yesterday, KSM and his attorneys will be entitled to know what information the government has on him and how we got it. Yoo points out that "During the 1993 World Trade Center bombing trial of Sheikh Omar Abdel Rahman (aka the "blind Sheikh"), standard criminal trial rules required the government to turn over to the defendants a list of 200 possible co-conspirators. In essence, this list was a sketch of American intelligence on al Qaeda. According to Mr. McCarthy, who tried the case, it was delivered to bin Laden in Sudan on a silver platter within days of its production as a court exhibit."

There will be no way around this. It will happen again. This will compromise all of our intelligence efforts to date on al Qaeda.

Yoo also adds: "For a preview of the KSM trial, look at what happened in the case of Zacarias Moussaoui, the so-called 20th hijacker who was arrested in the U.S. just before 9/11. His trial never made it to a jury. Moussaoui's lawyers tied the court up in knots."

To those that say that the American justice system can handle such a trial and that we've done it before, I say you're missing the point. The point is that you simply cannot treat an act of terrorism on Americans as a criminal matter. It was an act of war and must be treated as such. To drag KSM and all of the evidence into a courtroom is the most an incredibly dangerous thing to Americans that Obama could do.

This decision has simply got to be political suicide for Obama. I can not figure out why he would make such a hugely unpopular choice and one that he knows full well puts America right back in al Qaeda's crosshairs.

Many of us have been questioning his love for America from day one; this just reinforces that opinion in my mind. He should take every effort possible to keep America safe from another terrorist attack. He has not done so in this case.
Posted by Pat Austin Becker at 5:08 AM

Linked you here as an update.

Quoted from and Linked to at:
FEELING VIOLATED