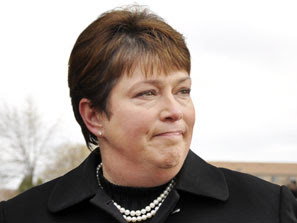 Dede Scozzafava is upset because Republicans were "vicious" to her. Could someone get right on the organization of that pity-party, please?

Dear Dede. Let me assure you that if what you endured during the short course of this campaign made you feel maligned or offended your sensibilities, please take solace in the fact that you aren't Sarah Palin and you didn't have to endure what she went through for MONTHS longer than your supposed abuse.

And it could be, Dede, that had you properly represented yourself as a liberal from the get-go, as they say, this could all have been avoided. If there had ever been any doubt about your liberal leanings, your endorsement of the Democrat in that race simply proved the point that you are a liberal. Period.

Maybe someone could order a copy of Palin's book and ship it to Dede? She could learn what real conservatives stand for as well as take comfort in the fact that nobody made rape jokes about anyone in her family, nobody attacked her wardrobe, nobody filed ethics charges on her, nobody descended on her hometown en masse and interviewed everyone she'd every known from her first breath to present day, nobody accused her of using her family for props, and nobody accused her of faking a pregnancy, just to name a few.
Posted by Pat Austin Becker at 7:12 PM

If she's looking for sympathy, it's in the dictionary between 'scatalogical' and 'syphilis'.