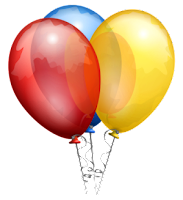 This'll be quick; today's my "hoppy bird day" as Steve might say, and we're headed to Minden to explore Milly's new purchase of goodies at Second Hand Rose!  My camera is recharging so come back later for pictures and see what's new.  And again, if you want me to scope out something for you, leave a comment and I will.  I have a couple of requests already!

Professor Jacobson wants you to know that John Kerry thinks you're dumber than a box of hammers.

Pirate's Cove is giving Obama credit where credit is due.

Doug Ross posts on the shenanigans at DOJ and also has a nifty pic for his Links today.

Stacy McCain encourages Christine O'Donnell to use some of the mud slinging to her advantage; she sort of is already...she was spot on this week when she brushed off the "witchcraft" nonsense with, "If I was a witch, Karl Rove would be a fan by now!".  Heh!

Pundette posts on the ridiculous Colbert testimony before Congress.

Yukio is headed to my neck of the woods!  I'll buy you some tea at Yeero, Yeero Yukio!  Give me a call!

This is a wonderful post from Bob Belvedere; sad he has to write it, but spot on.

Carol has a must see video.

Mind Numbed Robot is in a mess.

And finally, Bride of Rove tries to think like a liberal.  Well, sort of.

Why in the hell does lightening not strike these lying liars dead on the spot when they lie like that? Why? Where is God when such evil speaks? My second thought was: Why does Mark Levin hate me THIS MUCH that he continues to torment me with sound bites of President Obama and Robert Gibbs?


And with that I've got to hit the showers and hit the road.  Happy Saturday to you!
Posted by Pat Austin Becker at 9:32 AM

I want to wish my beautiful wife a "HOPPY BIRD DAY!"
I love you with all of my heart.

Thanks for the link, Pat.

Happy Birthday! And of course, here's to many more. :)

Thanks, Teach! It was a good day! Next up...Oktoberfest on Friday!

And thank you for the kind words and the link.

I just caught the door open after Bob, I guess.

A belated HBD! Robo-Love to you and yours Pat. Keep up the fine work and thanks so much for the link!