Another Victory for the Illegals 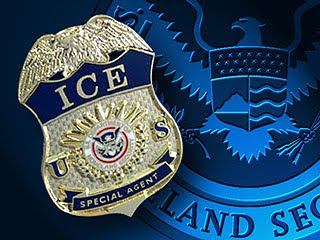 The latest memo from ICE's John Morton "intends to prohibit not only his officers, but also local officers with 287(g) immigration authority, from busting illegal aliens who are discovered as a result of traffic violations," according to Jessica Vaughn at the Center for Immigration Studies  (H/T:  The Corner):

Never mind that local patrol officers around the country routinely come across unlicensed illegal alien drivers in unsafe and/or uninsured vehicles, sometimes transporting vanloads of smuggled and illegally employed aliens with stolen identities. Forget the 9/11 terrorists, the Ft. Dix plotters, the Times Square bomber's money brokers, and the many other notorious illegal aliens who have driven our streets without fear of encountering local cops or immigration law enforcement. Don't mention that the Colorado State Patrol has eliminated (knock on wood) alien smuggling-related traffic fatalities by implementing a 287(g) program that removed illegal aliens caught driving unsafely on Colorado highways.

Seriously, I've asked this before, but if Obama were TRYING to destroy the country, what exactly would he be doing differently?

I don't know what he would be doing differently. His administration and his allies in congress seem right on track damaging the nation already.

This is bullsh#t. Arizona just needs to do what Arizona needs to do. Screw the Fed. They Fed is busy screwing all of us.

Gotta agree with Red here. And should Ms Kay Bailey Hutcheson try to avoid going quietly out to pasture, remember that she is squarely responsible for this. She planted a poison pill in an appropriations bill that effectively gave the Dept of Homeland Security free rein to ignore or even countermand Acts of Congress and other laws:
Pittsburg Tribune 2007 Our legislators need to stop trying to write their own bills and just start undoing the worst of the past 10 years.

Hi, I was reading your blog because I found a link on google pertaining to"anodyne therapy". I have just been diagnosed with small fiber neurophy. I read a couple of posts about your mother. I wonder if you would mind to let me know how it worked. I do hope your mother got relief and is doing well. Thanking you in advance, Margaret Knox
email - gypsy1958@comcast.net