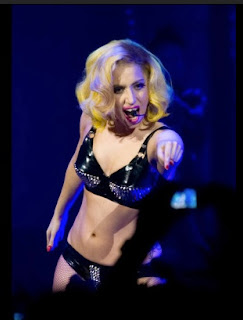 You almost have to laugh at the insipid, ridiculous blathering of someone like Lady Gaga:

Lady Gaga tells Vanity Fair contributing editor Lisa Robinson that she tries to avoid having sex because she is afraid of depleting her creative energy—“I have this weird thing that if I sleep with someone they’re going to take my creativity from me through my vagina.”

Ms. Gaga is on board with other "celebrities" like Kanye "George Bush Hates Black People" West in protesting SB1070, although not to the point of boycott (for her).  At her Phoenix concert this weekend, she told the crowd:

"We have to be active. We have to protest.  . . . I will yell and I will scream louder," the 24-year-old pop sensation told the sold-out audience at the US Airways Center.  "I will hold you, and we will hold each other, and we will peaceably protest this state."

She told them about a meeting a young boy shortly after her arrival in the state...

During Saturday's concert, Lady Gaga told the crowd about a boy she met earlier in the day who's home was raided over "a parking ticket or something," and whose brother was deported to Mexico,  the newspaper reported.  Calling the case "disgusting," the star, whose real name is Stefani Joanne Angelina Germanotta, dedicated the song "You and I" to the boy.  "I think it's important that people understand that it's a state of emergency for this place and this state," she said.

I haven't been able to find a news report of said incident, and I'm unaware of the provision in SB1070 that allows parking ticket raids, but if you're here illegally, I guess that's a risk you take.

Ms. Gaga laments the "state of emergency for this place and this state" and on that account she has it correct - just ask Sheriff Paul Babeu who said:

What’s very troubling is the fact that at a time when we in law enforcement and our state need help from the federal government, instead of sending help they put up billboard-size signs warning our citizens to stay out of the desert in my county because of dangerous drug and human smuggling and weapons and bandits and all these other things and then, behind that, they drag us into court with the ACLU,” Babeu said.

Two hundred and fifty thousand (250,000) were detained last year for being in the country illegally according to U.S. Customs and Border Protection, and 17% of those already have a criminal record in the United States.


I don't guess statistics like that matter to Ms. Gaga.


Maybe she can add a chorus of Kumbaya to her next act.
Posted by Pat Austin Becker at 3:38 PM

Helluva way for Lady GaGa to protest Arizona: Make a boatload of cash from performing a show in Phoenix while trashing the state's assertion of it's tenth amendment rights. She can name her next album 'Classy Hypocrisy'.

The only thing anyone is likely to take from Lady Gaga's vagina is a social disease (the gift that keeps on giving).

Wow....a few hundred of my brain cells just comitted seppuku after reasing that.

Great, then let them come stay at your place... I hope they take your creativity, LOL

Went from really weird, to really weird moron in a few sentences. Must be some sort of record.

She makes about as much sense as when Marilyn Manson said he wanted to have one of his leg amputated, because having a prosthesis would be cool.
Where in the world, or what universe do these, do these people come from.
And what's even dumber are the people who follow and beleive wholeheartedly in what these idiots are saying, and tell us that we should listen to people like Lady GOO GOO because the must know what they are talking about, because they are celebrities.