The Liberal Left Misses Dubya, Too 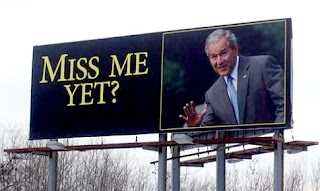 Oh this is just too gleefully rich for me:

There's a new argument emerging among supporters of the Ground Zero mosque. Distressed by President Obama's waffling on the issue, they're calling on former President George W. Bush to announce his support for the project, because in this case Bush understands better than Obama the connection between the war on terror and the larger question of America's relationship with Islam. It's an extraordinary change of position for commentators who long argued that Bush had done grievous harm to America's image in the Muslim world and that Obama represented a fresh start for the United States.

Oh you are just kidding me!  Seriously?  We've got the likes of Maureen Dowd pining for Dubya?

Ed Morrissey has the rest:

That, of course, is one of the delicious ironies of this situation.  Obama has done nothing but attack and demonize Bush for the last nineteen months, mainly to distract attention from Obama’s own failures on the economy.  In fact, while Dowd et al demand a response from Bush, Obama is busy on the campaign trail (an activity that Obama chided the GOP for doing while Obama attended big fundraisers) attempting to continue blaming Bush for the economic slide Obama promised to prevent with his massive spending.

Heh!  And Doug Powers has a wonderful line here:

Are they asking the same George W. Bush who started an illegal and immoral war, lied about WMDs so his buddies could profit from the invasion and tortured exclusively Muslim detainees to come to the rescue of a president who was supposed to save America from all the horror Bush hath wrought? That’s fine, I just wanted to make sure we were on the same page.

Yes, I appears most of us are on the same page.

And let me reiterate what most poeple already recognize; this isn't about building a mosque.  It's about building a mosque right there.  That point is even more evident when you know that Gov. David Paterson offered to meet with developers in order to help them find a new site and they refused.  In fact, developer Sharif El-Gamal said the planned mosque is "nowhere near the World Trade Center site."  Yeah, well, we know that's not true.  We know, too, that wreckage from the attack crashed through the Burlington Coat Factory building which is to be the site of this mosque.  Pretty near, if you ask me.

And now the liberal left who support the building of this mosque on the ashes of the World Trade Center want George W. Bush to weigh in.  They assume he will support the plan; he might and he might not.

Be careful what you wish for.
Posted by Pat Austin Becker at 4:29 PM

As to whether Mr. Bush or any of his allies supports the positon of our President, is so much chatter. What Ms. Dowd thinks or another talking head believes is just the usual effort to get attention. The issue is about local zoning and if that is possible, then it's about the constitution giving rights to all religions to build facilities on any private land they own or lease.


Myself, this evening I am watching the last combat soldiers leave Iraq, 7 years after they went there supported only by lies. Just as in Vietnam thousands of deaths and injuries and no real result except hundreds of thousands of the countries citizen's death and disruption.

Nation building is a stupid use of human life and treasure.

People try to define the issue with Islam in terms of 9/11. Certainly 9/11 was the more dramatic act that had been played, but it was far from the only time that we have had Islam kill innocent people. The issue has been going on for about the last 100 years and really represents Western values and religion coming into contact with Islam. Whether Islam is in Russia, India, or any other country, there is conflict. If you support a cause (in this case Israel) that is counter to Islamic concepts, then there is a great chance of innocent people being killed or hurt.

I think that this is the real reason that the majority of people oppose the project in New York. It is obvious that the effort is meant as a victory memorial (there are no Muslims in the vicinity of the "neighborhood center").

The problem that the US faces is that we are really at war with a religion and have been for about 50 years.

Ground Zero is the latitude and longitude location of the towers, and the explosions caused by Al Qaeda terrorist piloted planes, who were financed by Islam/Muslim-Hamas-Hezbollah-etc.>Pakistan, Turkey, Afghanistan, Yemen, Saudi Arabia and primarily Iran where bin Laden is hidden now> organizations, and the concussions and smoke and dust and ash blanketed more than a 16 block area of Lower Manhattan (which by the way you might recall is the place the Dutch traders bought from American Natives in 1626, thereby effectively founding this nation) for months afterward. It is a fact that the bucks for this building are being funneled from Hamas. SO DON'T TRY AND FLOAT THE 2 BLOCKS AWAY OR IT'S ONLY NEAR THING by me, or "don't piss on me and tell me it's raining" as the currently popular analogy says.

Muslim=Islam=terrosism. It has been going on since the 8th Century. Islam vs.Christianity. Do they still teach this in school? If not, then you can find out for yourself. Don't just take my word.