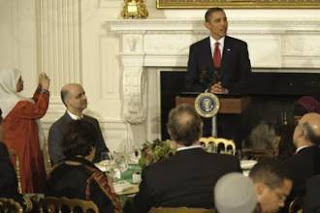 Today was the first day of school for the students.  NOW I remember what it feels like to need to go to sleep at 7:30 in the evening...long before the sun even goes down.  Forgot that part.

I was getting all ready to settle into bed with Stieg Larsson and Sam Adams when I made the mistake of stumbling across Obama's Ramadan message.  I knew better than to read that.  Really.  But I did it anyway.

Now, the whole idea of Obama having a message for Ramadan doesn't drive me crazy; neither does the iftar dinner.  George Bush held one every year he was in office.  But, oh my goodness, is the message ever different.  Consider what George W. Bush said in his final White House iftar in 2008:

"One of the great strengths of our nation is its religious diversity. Americans practice many different faiths. We all share a belief in the right to worship freely. We reject bigotry in all its forms. And over the past eight years, my administration has been proud to work closely with Muslim Americans to promote justice and tolerance of all faiths," he said.

For all of us must remember that the world we want to build – and the changes that we want to make – must begin in our own hearts, and our own communities. These rituals remind us of the principles that we hold in common, and Islam’s role in advancing justice, progress, tolerance, and the dignity of all human beings.   Ramadan is a celebration of a faith known for great diversity and racial equality.  And here in the United States, Ramadan is a reminder that Islam has always been part of America and that American Muslims have made extraordinary contributions to our country.

On the surface, Obama echoes Bush in saying that Muslim Americans have made contributions to our society.  But the heart of Obama's message stresses the change that Americans must make in their hearts..

As Americans, he says we should  change our hearts and communities to emulate Islam in "promoting justice, progress tolerance and dignity of all human beings."  It's like he's saying that as Americans we hold but don't practice those principles.

I probably just missed the "dignity" message in this story, and the justice served in this one. And I'm sure there is progress and tolerance in this story, if I could only find it.  I don't know about racial equality but the gender equality can't be found in this story.  Or this one.

Don't piss down my back and tell me it's raining.
Posted by Pat Austin Becker at 8:51 PM

There is stupid and then there is Harvard stupid.

"These rituals remind us of the principles that we hold in common, and Islam’s role in advancing justice, progress, tolerance, and the dignity of all human beings. Ramadan is a celebration of a faith known for great diversity and racial equality."

I think you are over parsing this. If you removed the names, it would be hard figure out who said what. There is barely a hair of difference in what they both said.
I think a lot of you guys are prejudice. I'm not talking about racially prejudiced, I'm talking about breaking it down to it's simplest meaning. Pre-judging. Obama=bad. If Obama said something against drunk driving, I think a lot of conservatives would be in favor of drunk driving.
Even a broken watch is correct twice a day.
He said nearly the same thing as "your guy", but there's a problem now?
I think some of the things he said could be applied just as easily to Christianity. I wouldn't have a problem with that. I wouldn't have a problem if he said something like that about Judaism. They are three of the world's major religions that have long overlapping histories.
Is it the whole "secret Muslim" thing? He's a Christian. He's professed his faith as a Christian. I don't know too many people that lie about religious convictions. Would you doubt a neighbor, someone at your church, anyone you've met if they professed to be a Christian?

Obama gives lip service to being a Christian but his actions are pro-Islam. The differences between GW's statement and Barry's is that Barry's statement was entirely about pushing the Islamic agenda as opposed to the generic statements by Bush about celebrating religious diversity.

You can't credibly use the same argument conservatives used during the Bush administration every time the left attacked Bush. Bush could have found the cure for cancer in his garage and the left — so filled with vitriol over anything to do with W — would have found a problem with it. A big difference this time is that our current president doesn't believe in our sovereignty and our national greatness.

Obama said that Islam has had a "role in advancing justice, progress, tolerance, and the dignity of all human beings." Which is a bunch of lying marlarkey no matter whose guy Obama is. They do not want justice they just want Sharia which is a bunch of Arab tribal prejudices that have changed as little as possible over the centuries. A few Muslim once were involved in the preservation and advancement of math and science but that was a thin window long, long since closed which is incredibly over emphasized by people who have searched in vain for a factual basis on which to compliment Islam for being civilized. Muslim tolerance is a giant myth without any basis in reality. And Muslim respect for the dignity of all is as much of a lie. An Islamic state has no place for citizens who are not Muslims. Christians and Jews are allowed to exist at the cost of extra taxation and a separate but lower position. I think it is quite acceptable to kill all others. What Obama says about Islam is a pack of lies and he knows it. But I imagine that he feels assured that too few Americans have any knowledge of the subject. He also feels secure that the MSM and the Professional Left will back him by smearing anyone who attempts to call him to account for his lies.

It's not raining in my neighborhood either.

One example of racial equality.

Sorry about the typo:

Here's the correct url to an example of "racial equality" in Islam.

Red, I calls it like I sees it.
I didn't like Bush, I still don't like Bush. I do think things could have been worse. I think he did the best he could. During the first term, I admit I had hard times believing Bush was "really" a Christian. Then I thought, seriously who lies about their religion? I guess there are different types of Christians. I ask myself WWJD? If someone is hungry, I think they should be fed. If someone is ill, I think they should be healed or taken care of. As an innocent man sentenced to death, I doubt Jesus would be pro-death penalty.
The Far Left and the Far Right don't act too much differently from each other. Far Left had peace protest, you guys have tea parties. The Far Left thought Bush was a Fascist. The Far Right says Obama is a Nazi. Michael Moore does the same thing for the Far Left that Rush, Beck and the like does for the right. Different sides to the same coin.
I don't let people think for me. I try to find the bills being voted on, instead of someone with an agenda telling me what they want me to think is in there.
I follow the news pretty closely, when did he say he didn't believe in our sovereignty? You said he doesn't believe in our "national greatness"? That sounds a lot like "warm fuzzy"-talk. There is no other country I'd want to live in. Sure, I think it's great. I love this country. Do I think every action taken by this country has been right? No. Do I think we can do better? Yes. I can look at this country and see the good, the bad and the ugly. Do you think I don't believe in the "national greatness" because I don't think EVERYTHING this nation has done has been GREAT? As with the other, do you have a quote where he says he doesn't believe in our "national greatness"?
I listen to Rush, Beck and others to see what THEY are saying. All I hear is Obama thinks this, Pelosi thinks that, Reid thinks this. I personally think a lot of the right wing pundits are some of the worst mind readers ever. When someone says something, what they have said is streeeeeetccccched until it fits their narrative. I rarely hear how good the right's idea are, but I hear all the time how "Liberals hate America".
Neither side "hates" America. We look at the same problems and see different solutions. I think demonizing your opposition doesn't help anyone.

"Quick, toothpaste! Get Back in the tube!!"