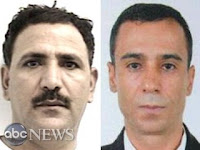 The two were allowed to board the flight at O'Hare airport last night despite security concerns surrounding one of them, the officials said.

The men were identified as Ahmed Mohamed Nasser al Soofi, of Detroit, MI, and Hezem al Murisi, the officials said. A neighbor of al Soofi told ABC News he is from Yemen.

Airport security screeners in Birmingham, Alabama first stopped al Soofi and referred him to additional screening because of what officials said was his "bulky clothing."

In addition, officials said, al Soofi was found to be carrying $7,000 in cash and a check of his luggage found a cell phone taped to a Pepto-Bismol bottle, three cell phones taped together, several watches taped together, a box cutter and three large knives. Officials said there was no indication of explosives and he and his luggage were cleared for the flight from Birmingham to Chicago O'Hare.

Incredible.  I can't wait for the explanation on this one.  "The system worked," maybe?
Posted by Pat Austin Becker at 5:30 AM

This is the explanation I heard on this morning's news:

"They weren't doing anything illegal."

I figure you need to get out Shreveport and hide somewhere safe. You be sure to blog about where that safe place is because there is no safe place.

Our best tool against terrorism is ignoring them. Law enforcement is doing what they can. You don't like what they are doing, become a cop and do the job better. Or maybe move to some other country where you can help them become secure. This fear pushing is unbecoming of an American citizen.