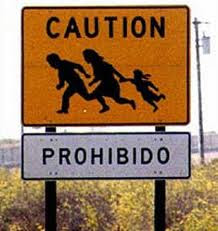 I saw David Vitter on Fox this morning discussing the leaked memo on immigration; he was outraged as many of us ought to be.

W. James Antle, III has an article at American Spectator explaining the contents of the memo.  Basically it's a backdoor amnesty plan; it gives United States Citizen and Immigration Services options on how to circumvent the legal process of immigration:

One proposal contained in the memo was that the USCIS grant "parole in place," which comes with a work permit and the right to apply for a green card, to various illegal immigrants. Another suggestion was to give "deferred action," delaying deportation indefinitely and preserving eligibility to apply for a work permit, to illegal aliens who would have benefited from the DREAM Act.

It should surprise no one that this administration believes this is even an option for them.  This is the administration that has expanded governmental authority to new heights.

As Charles Krauthammer pointed out:

It is just a bad idea and bad politics. It’s lawless. These are people who are appointed people in the administration deciding because Congress hasn’t enacted a law it wants enacted, it will do it by creating or finding loopholes in existing law.  It is like the administration, which was not able to get approval by Congress for cap-and-trade or carbon tax, and having the EPA do it by itself. That’s not the way the Constitution says our government runs. The laws are done by Congress. The administration is supposed to administer.

The will of the American people be damned!  Obama knows more than you do and he's smarter than you, and he knows what's best for you!  He won!

Since we haven't seen his college transcripts, we don't know if Obama studied any basic civics classes, but I'm guessing not.

"Can these illegals also gain voting rights by decree of the USCIS? "

Why would it even matter at this point? Congress and this administration is hell bent on not needing any sort of vote. They just do whatever they damn well please, votes be damned.

The people who should be most upset and therefore the most active against legal amnesty for illegals are the current legal immigrants who spent their time, study, and money learning to be Americans and American Citizens. To give it away now by decree of Obama is more treasonous action by this sitting president. These citizens probably have a fresh memory of the requirement of the Declaration of Independence that citizens change a government gone astray.

What gets me is that (although there's isolated muttering from us "little people" in the boondocks) there's been NO PUSHBACK from anyone who could lodge an official complaint, when this Administration's actions repeatedly come right up to the edge of unconstitutionality.

(At least, I don't think Obama has technically crossed the line yet; in the GM and Chrysler takeovers he "pressured" the stakeholders to accept less than standard bankruptcy proceedings would have recovered for them, and they agreed, presumably voluntarily. He didn't actually fire General Motors' GM, he "asked for his resignation" and got it. We don't know exactly how the $20 billion BP fund was created, since it was "negotiated" behind closed doors, but it can't really be called extortion unless there was a threat made; so far nobody's saying there was. Regarding the termination of Inspector General Walpin, that was only-just-barely-legal because Obama had him put on leave until the mandatory 30-day period had expired, THEN fired him.)

The whole tenor of our national government has become completely alien to normal law-abiding Americans since the Democrats won the presidency and took over both Houses of Congress. This administration has hired tax cheat after tax cheat with no apology. Congress passes 2000-page bill after 2000-page bill without bothering to read them. The Dept of Justice has all the appearances of of being an "enforcer" agency for an Administration bent on finding white racism around every corner. Obama, Pelosi, and Reid will use any "end run" they can come up with to thwart normal legislative processes in order to get unpopular new laws rammed through Congress. They spend like there's no tomorrow, then they make sober speeches about fiscal responsibility, then they cram another trillion-dollar entitlement bill into law.

They have done SO MUCH that's SO WRONG, and SO FAST, that I'm left breathless. Beyond that, it seems that every week there's a new proposal for government to take over another aspect of our lives (apparently because Our Wise Ruling Class has determined that we poor ignorant fools can't be trusted to make our own choices about how to live our lives, so they feel obligated to "help us" do things "the right way" -- ie, their way).