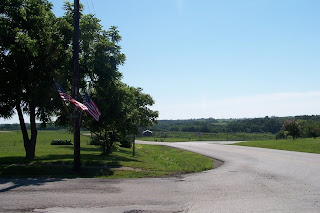 In one of its more idiotic moves, the EPA is continuing its move to regulate ...farm dust.  Farm dust!

This issue has come up before; in 2009 a federal court upheld the EPA's right to regulate farm dust when the Bush administration tried to regulate airborne soot and dust:

The American Farm Bureau Federation and the National Pork Producers Council challenged EPA in 2006 over its decision to regulate coarse particulate matter -- or dust -- in rural areas, arguing that the agency had failed to show any negative health effects associated with the dust (Greenwire, Dec. 15, 2006).  EPA had considered exempting farming and mining operations, but the agency ultimately decided it could not exclude particular industries.

Farmers then, and now, naturally decry the move as stifling and ridiculous.   Anyone who has ever been on a farm, or on a rural gravel road, knows there's dust on a farm:

Farming and agriculture groups said the regulations would hurt their industries, affecting everything from combine dust to feedlot dust and even the dust from gravel roads.

What the regulations do not do is taking into account the fact that most often farmers do not have control over the creation of this dust. For instance, when you are traveling down the highway and see a farmer planting his field in dry years you see a cloud of dust shadowing the machinery. This dust is created when the machinery stirs up the dirt during the planting process. Or perhaps it is sometime in fall, you see a combine harvesting the beans or corn. As the combine harvests the crop dust is created from the dry plant material in combination with the dirt being stirred up by the combine’s wheels. Another situation when dust is created is not necessarily related to farm work. When a vehicle travels over a dry gravel road dust is created. There really is not much that can be done to quell the production of this dust, but the EPA is insistent on regulating it nonetheless.

The latest maneuver in the debate is a letter to the EPA signed by 21 senators protesting the move to regulate farm dust as explained in a July 8, 2010, Policy Assessment related to the Clean Air Act.  The new guidelines "would establish the most stringent and unparalleled regulation of dust in our nation's history."

Ed Morrissey at Hot Air wrote about this in March 2009:

Now, farmers will be held accountable when their dust moves outside of their property lines and towards towns and villages.  That will impose extra cost on them depending on which way the wind blows, an excellent metaphor for Congress but a deadly imposition on a farm sector already struggling with an economic turndown and falling land prices.  The compliance costs to keep dust tamped down will be enormous, and will force out the smaller farmers who can least afford the mitigation costs.  It pushes the productive family farm even further into the anachronism category.

We need a strong agricultural sector to produce food as inexpensively as possible with maximum efficiency to keep us fed and healthy.  Dust may provide some health risks, but nothing as acute as poverty and starvation, which existed in much more significant scale in the US before the Green Revolution of the 20th century.

If such a plan ever moves out of the realm of debate and into practice, it would indeed crush the agriculture industry, especially the family farm.  Large corporate farms might be able to handle the extra costs, but the small farmer doesn't stand a chance.

Where do they think our food actually comes from?  It just materializes in a Whole Foods on its own?

(Cross posted at Potluck )
Posted by Pat Austin Becker at 10:36 AM

IDIOTS!
are we voting or was that a statement?

The real problem are idiots. Idiots running the country first and foremost.
Secondly, Idiots who move from places like New York, Chicago, and other urban areas to places like the rural midwest because they have read in a publication like Newsweek that those places are the best places to raise a family.
The trouble is once the urbanite moves into the rural setting he starts to lament, "That's not how we did it back in New York," or starts complaining about the smell of the hog and cattle lots and the evil dust being stirred up by the rube farmers.
Hell folks, I some questions for people like this.

1. Didn't you move to get away from the bullshit?

2. So why would you want to bring the bullshit you're trying to get away from and burden those you moved in amongst?

The sharpest tacks in the board rarely, if ever, work for the federal government. And these people want to run our lives for us?!

I keep wondering why this group that holds the reins expects others to obey their rules when they refuse to enforce or obey actual laws? And why the rest of us keep trying to figure out how to follow their rules and get them to enforce actual laws....
*sigh*

It’s disgust me that a Republican (Nixon) established the EPA by an executive order.

One thing this does show. The primary purpose of any bureaucracy is not it’s stated purpose. It is to insure its own survival. Compared to that all of its other endeavors shrink to insignificance . Ozone, global cooling, err global warming, err climate change, err what the hell else is called this week. Now it’s going after dust in the wind. Anything to justify itself.

Try having Sludge/Human Waste in with the crop dust. you will have major major health problems for a long long time. Epa needs to Regulate sludge spreading with all these Toxic Chemicals hauled on crop ground. where the sludge is people are breathing this all in & for years. it causes,Cronic health issues such as diarreah , vomiting,
alligeries infections,pneonima, boils ,respatory, CANCER !!!!! The list goes on !!! this last for years and has even caused death !
Proven facts on all this .
You just can't imagine what its like til someone puts you in this
Situation. Epa needs to Regulate
Sludge/Human Waste for Everyones Health. I farm there is no way getting around crop dust you have to take crops out when its dry. Cant believe that Epa dont have Regulations with Sludge WOW !! Something is wrong here this is HUGE health Concerns. Sludge is like a MONSTER !! Sludge/Human Waste with all these Toxic Chemicals are put on Crop Ground that we all eat off of!
MY,MY. We all love to eat!