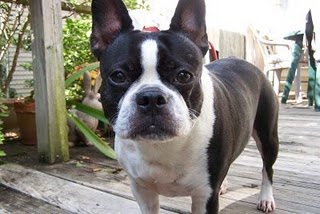 I have to work today.  We have Open House at the school and I have to be there this afternoon.  Meh.  Then back to the daily grind tomorrow;  where did my summer go?

Yesterday I had a mental ticker over my head all day as I ticked off one chore after the other.  I got both dogs to the vet for their yearly shots and new supply of heartworm pills.  I got my car washed and vacuumed.  Got the license plate light repaired on the Teenager's car.  Went to visit my mother at The Glen.  Sat in 100 degree heat while she smoked four cigarettes.  Went to the grocery store (forgot half my list...) then came home and made shrimp primavera for dinner (wild caught Gulf shrimp!).

Meanwhile, I noticed that Checkers, the Boston Terrier, either had an allergic reaction to her shots (never happened before, though...) or got stung in the backyard, or poisoned by a frog.  Her whole little face was swollen like nobody's business and her muzzle was red, red, red.  She acted fine and was breathing fine, but I called the Emergency Vet (mine was closed) and they told me to monitor her breathing and to give her half a Benedryl.  She stayed swollen all evening but by midnight it had started going down some.  However, then her fur started looking lumpy and weird and her belly was all red; maybe the poison was working its way out of her.

This morning she still acts fine, is much less swollen, and her coat looks back to normal.  I gave her another half a Benedryl to work on the remaining swelling in her face and she seems fine.  I'll never know what happened but it was scary.  The other dog, the Lab, keeps coming up to check on her while she's sleeping. 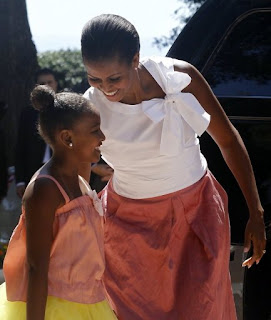 Otherwise in the world, the story that keeps catching my eye is still the Michelle Obama vacation; not sure why I keep going back to that when there are other political happenings going on, but the hypocrisy of it just galls me.  I was reading this account, picked up from Drudge, from the Pittsburgh Post-Gazette which tries to clarify some of the misinformation.

Other officials, asking not to be named because the first family considers it a private matter, said some reports of the trip have been exaggerated. Mrs. Obama is not traveling with 40 friends, one official said, but with two friends and four of their daughters, as well as a couple of aides and a couple of advance staff members.

Okay.  Six friends.  So why 60 rooms?  Or 50?  Is that misinformation, too?  I understand we have to have security and secret service, but 50 rooms?  Can't they double up?!
Robert Gibbs wouldn't comment other than to say  "She is a private citizen and is the mother of a daughter on a private trip. And I think I'd leave it at that."  The article quotes Anita McBride who points out that as a "public person," the First Lady draws scrutiny.  It's a matter of semantics that Gibbs is playing, isn't it?  She's a private citizen, but a public person, and this trip, at least a large portion of it, is funded by the taxpayer.

Professor Jacobson points out that this trip is "the latest in a line of seemingly imperial indifferences to optics in these difficult economic times."  And Allahpundit says,

As for the taxpayer expense for security, transportation, etc, (a) those same expenses would be incurred to some (lesser) extent during a U.S. vacation and (b) given the aortic hemorrhaging that is our national debt, what’s a little vacation paper cut here and there?

Yes, indeed, those midterms are right up the road and the optics of this trip, and the one to follow later in the month, will be fresh in the minds of the voters.  I guess maybe the Obama supporters don't begrudge their king and his queen a lavish lifestyle on the taxpayer dime, but I clearly remember every time George Bush went to Crawford, Texas, they came unglued.  Laura Bush vacationed solo, too, as the Post-Gazette points out, but she mostly went to national parks.

Oh well.  As for me, I'm just looking forward to another trip to Natchitoches sometime this year.  Or maybe we'll run up the road and check out El Dorado, Arkansas.  Steve will have to be elected president before I can afford any lavish five star hotels in Spain and cordoned off beaches.

Isn't it strange that when a Republican is in office the libs accuse them of being imperialist or fascist, but when a real imperial fascist (with a D behind their last name) is in office and actually doing what they accuse others of doing, not one friggin' word.

The ostentatious show of Big Money - it's the Big Man thing. I actually don't think either Mr or Mrs Obama are naturally the type to throw (their own) cash around, nor do either of them feel the need to impress anyone. Mr Obama, especially, grew up in affluence, regardless of the PR story, and is quite confident of his level of success. However, there are a range of social constituencies that expect success to be showy, and several of those are important to Mr Obama's career - not only in the US but elsewhere as well. It's why every small town general practice lawyer drives a big car - if he can't afford a Navigator, he'll find a second hand H3.

This is an odd trip. An odd location to visit - especially with a 9 year old. Especially with a 9 year old whose big sister is away at camp for the first time ever. And other than a stop for ice cream in Granada on the first day, they did little of interest for a young child, even a precocious one. They toured Moorish cities: " Alhambra, the seat of Moorish power when they ruled Spain." "Ronda, the last stronghold of the Moors."

There's a brief mention that the Arab royals own vast estates in Marbella, and of the scandals and "high level" crime the city is known for.

There's some mention of "Spanish PR firm Oak Power Communication" estimating the value of the visit: "publicity for Spain's southwestern Andalucia region worth around 800 million euros (one billion dollars)". So it could be as much as anything a PR favor for Spain to make up for Mr. Obama not going to the EU Summit there in February.

However, the last time Mrs Obama took an odd trip that involved the King of Spain, it was to Denmark (which is really close to Sweden), and a week later "unexpectedly" Mr Obama won the Nobel Prize.

So what else could be happening behind the scenes?

This is getting long, will make 2 posts...

So, what else could be happening behind the scenes? The most interesting possibility I've come across is the arrival of the freed Cuban political prisoners in Spain about a week before Mrs Obama's trip was announced.
The article said they were shunted into really bleak accomodations and even just out of prison they were shocked. Some mentioned a wistful desire to come to the US but said no one had offered them the opportunity.

I figure another week or 2 or even at some remarkably fortuitious time in september, we'll find out whether it was just an odd vacation and lunch or something more.

So they've been to Bar Harbor, Nantucket and Spain since urging Americans to visit the Gulf Coast to help the flagging economy *coughcough* moratorium.

Yes, President Bush went to his ranch which is in the United States which gave support to our country with money and jobs, again in our country. Hope that cute puppy of yours is fine.

I think they are living it up on our dime while they still can. Reminds of a movie that's out.