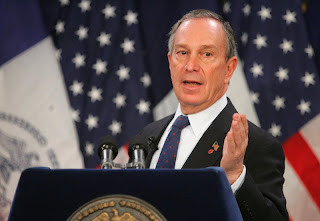 Michael Bloomberg's defense of the mosque to be built near Ground Zero is simply disgraceful as well as weak.  I haven't weighed in on this issue much on this blog, partly because so many others are doing a fantastic job on the coverage (Pamela Gellar...) and partly because I just couldn't believe it would actually happen.  That's a problem I often have - "That's so ridiculously inconceivable it just CAN'T happen!  People can't be that crazy!"  I said that before the 2008 election.  See where that got me.

Yesterday New York's Landmark Commission voted unanimously not to give landmark status to a building where the new mosque is to be built just 600 feet from Ground Zero.  This means, of course, that the building can be demolished and the construction on the mosque can proceed.

Bloomberg gave a speech following the vote in which he drew some, well, odd comparisons:

"Of all our precious freedoms, the most important may be the freedom to worship as we wish. And it is a freedom that, even here in a City that is rooted in Dutch tolerance, was hard-won over many years. In the mid-1650s, the small Jewish community living in Lower Manhattan petitioned Dutch Governor Peter Stuyvesant for the right to build a synagogue – and they were turned down.

Okay, so I agree with the fact that our founders intended us to have "freedom to worship as we wish" but he loses me on the comparison to the Jewish community.  I see where he's going with this - that we should exercise tolerance - but the analogy doesn't work.  The Jews never bombed American buildings and they didn't kill 3000 innocents on 9/11.   He then goes on to the Quakers:

"In 1657, when Stuyvesant also prohibited Quakers from holding meetings, a group of non-Quakers in Queens signed the Flushing Remonstrance, a petition in defense of the right of Quakers and others to freely practice their religion. It was perhaps the first formal, political petition for religious freedom in the American colonies – and the organizer was thrown in jail and then banished from New Amsterdam.


Same argument here.  The analogy is flat.  He doesn't ignore the Catholics either:

"In the 1700s, even as religious freedom took hold in America, Catholics in New York were effectively prohibited from practicing their religion – and priests could be arrested. Largely as a result, the first Catholic parish in New York City was not established until the 1780's – St. Peter's on Barclay Street, which still stands just one block north of the World Trade Center site and one block south of the proposed mosque and community center.

The point he's making is that we should exercise tolerance and let other religions have the freedom to practice, to worship.  Nobody is denying that to the Muslims.  There are plenty of mosques in New York City.  There are lots of places that a new mosque could be built should it be necessary to do so.  The fact that THIS mosque is to be built on hallowed ground, at the site where extremist Muslims attacked and killed Americans, is such a gross display of insensitivity it completely trumps any insensitive issues that might lie in one's refusal to let Muslim's practice there.

For Bloomberg to ignore that is beyond the pale.

This is the thesis of his argument:

The government has no right whatsoever to deny that right [to use that site for worship] – and if it were tried, the courts would almost certainly strike it down as a violation of the U.S. Constitution. Whatever you may think of the proposed mosque and community center, lost in the heat of the debate has been a basic question – should government attempt to deny private citizens the right to build a house of worship on private property based on their particular religion?

First of all, nobody is denying anyone the right to worship.  Nobody is trying to "deny private citizens the right to build a house of worship," but don't build it there.  If the leaders behind the mosque project had any intention of bridging community good will and bring people together, they wouldn't build it there.  They don't.  Their point is otherwise intended.

Quite simply, the intent of this particular mosque is to serve as a sign of victory over Americans.  "We beat you.  You can't stop us."

Bloomberg is a fool to ignore this.

Namely, how is it that the planners, who have presented this effort as a grand design for the advancement of healing and interfaith understanding, have refused all consideration of the impact such a center will have near Ground Zero? Why have they insisted, despite intense resistance, on making the center an assertive presence in this place of haunted memory?

And do you just love Robert Gibbs yesterday and his goofy response when asked about this issue?  He declared that the administration was not going to weigh in on "local decision-making."  Since when have they adopted that policy?

In the end, it doesn't matter what they call the mosque, how they frame it, what kind of outreach they do, it's still a victory marker for radical Islam.  If the New York Landmark Commission won't do it, then some other legal way must be found.  It's a slap in the face to the memory of those who died there.
Posted by Pat Austin Becker at 10:02 AM

Come on! I'm told the mosque will demonstrate diversity.
I can't wait for the mosque to open so I can rush right over and visit the Gay-Lesbian outreach department.

Frankly I have had enough and for Bloomberg to use such a weak analogy is appalling. Using the Jews to convey tolerance for the Muslims is sickening since Muslims are against the Jews and damn near everybody else who isn't Muslim. Hell, they even fight each other over who loves Mohammed the most. I'm done. Screw tolerance. Practitioners of Islam get none from me — and neither does that tool Bloomberg.

Where in Hell did Bloomberg find it in his heart to do what he did? He must be one cold-blooded bastard.
He lived and saw first hand, probably as it was happening, the events that unfolded that horrible Tuesday morning of September 11, 2001.

My exposure, like millions of others, was through television and even then, if it were up to me, couldn't have decided the way Bloomberg did.

Oh he left out a few bits. The signers of the Flushing Remonstrance (which was not "forgotten history" as recently as when I was in grade school in the last half of the 1960s) were not reacting to someone just being "prevented from holding meetings" - they were reacting to the extended and repeated torture of people of any faith other than Stuyvesant's own identified excuse, the Dutch Reformed. Stuyvesant was an obsessive bully, and they were rightly worried about their own safety, as they had already been chased out of other places for their own radical beliefs. Stuyvestent also persecuted the Anabaptists and the Lutherans (who were also refused a meetinghouse)- everybody persecuted the Catholics - and when he went too far and started arresting and torturing people who had just unknowingly "aided" the rejected in some way, they took action. He responded by arresting and torturing their Sheriff, changing their town governmental structure, and requiring that an official minister be brought in to keep them on the right path.

Truthfully, I think the response of the Amish to a certain tragedy was a wise course that sadly cannot be taken here, but it would be better if it could be: As soon as the funerals were over, they brought a bulldozer and razed the schoolhouse, removing all indications anything had ever happened there, allowing the location to be forgotten. Their faith probably prohibits shrines as idolatry, but there is a deep psychological healthiness in allowing the location to revert to simply a place on earth.

Absolutely 100% agree: if these Muslims were REALLY working toward tolerance and brotherhood, they would voluntarily move the thing elsewhere.

(Who can forget all the instances in which it's been the MUSLIMS crying for "tolerance" and "religious freedom" and claiming their "religious sensibilities" are being offended {meaning: "You Westerners MUST capitulate to our demands. Or Else."} Amazingly, the door of tolerance and understanding only swings one way for the True Believers... )

Since they are pressing grimly forward with their plans for a 5-story monument to The Peace Of Islam (= the Peace of the Graveyard), there's no way to spin their actions as anything BUT the creation of a monument to the success of the mostly-Saudi jihadists who destroyed the Twin Towers and murdered nearly 3000 innocent Americans.

(PS- I wouldn't be surprised to find that the same Saudi prince whose $10 million blood money was rejected by Rudy Giuliani turns out to be the financial backer of this monstrosity.)

New York City has about 75,000 lawyers, and none of them can come up with a legal challenge?

Why would that be, I wonder.

It can't be lack of original thought. They could easily copy California's methods of keeping Christian houses of worship from sprouting up in "inconvenient" locations.

Actually I am serious. Bush defined this war as a "war on terrorism". Have you ever stopped to figure on what that means. It is like FDR in WWII declaring a war on Zero fighters and bombers, or torpedoes.

Instead, he should have declared our contempt for Islam. Not just the extremities. A significant proportion of Muslims clearly support the actions of the element that kills innocents. Most Muslims will not condemn their actions. The civilized world has been on a collision course with Islam for about 100 years. It is here now.

I think that it is stupid to have to go through security at the airport when screening should be on your association with Islam. The same is true for all other security venues as only Islam advoctes the harming of innocents. Our rights and liberties have been restricted to accomodate this "religion".

So let us redefine the war. We are at war with Islam and thus this religious symbol is an affront to all America and western civilization.

They do have the legal right to build the thing, but should not do so. It is a slap in the face and it is purposeful.