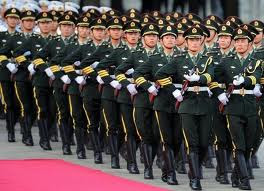 This is scary as hell:

A Pentagon report suppressed by the administration describes a massive Chinese military buildup that has only one purpose: to deny us access to the Western Pacific and destroy American forces that try.


IBD has the frightening details:

"China is fielding an array of conventionally armed ballistic missiles, ground- and air-launched cruise missiles, special operations forces and cyberwarfare capabilities to hold targets at risk throughout the region," the report says. These targets would be American bases and carrier battle groups that might be sent to aid Taiwan.

The 74-page Pentagon report also notes that China is "pursuing a variety of air, sea, undersea, space and counterspace" weapons designed specifically to attack U.S. forces. Primary among them is the Dong Feng 21D carrier-killer ballistic missile that can hit moving and heavily defended American carriers with pinpoint accuracy at distances between 900 and 1,000 miles from China's coasts.

They don't have to attack us; they already own us, thanks to Obama.

IBD questions why this report was delayed for five months and just now released.  Why was it suppressed?  Read their whole piece for the details.

Meanwhile, what are we doing?  Uhmmmm......not so much.  We are singing Kumbaya for a non-nuclear world.  We're canceling weapons programs and defense shields.  We're demilitarizing.

The Heritage Foundation points out:

The [People's Liberation Army] has enjoyed sustained growth in its resources, its capabilities, and its sophistication for so long that we are no longer surprised by its burgeoning reach and expanding envelope. There are individual technologies, such as anti-ship ballistic missiles, that are being pioneered by Chinese engineers, but we have become accustomed to China’s overall efforts to become a true military power.

You become complacent; you lose.  Period.
Posted by Pat Austin Becker at 7:16 PM

I would guess this is a way to get those Americans who have any money to buy more stock in defense contractors.

Bread and circuses again; as has been forever before.

I can't wait to hear Hilary Clinton scream, "How did this happen!" Like when she was screaming at some general after China launched a successful missle test.

Ah Hilary, your husband gave the Chinese the technology to do it. Remember?

The deindustrialization of the United States has been a bipartisan effort. Trace the legislation/regulation over the past 25 years, and you will see that this situation is purposefully being brought about.

"Today the path to total dictatorship in the United States can be laid by strictly legal means, unseen and unheard by the Congress, the President, or the people... outwardly we have a Constitutional government. We have operating within our government and political system, another body representing another form of government, a bureaucratic elite which believes our Constitution is outmoded and is sure that it is the winning side.... All the strange developments in the foreign policy agreements may be traced to this group who are going to make us over to suit their pleasure.... This political action group has its own local political support organizations, its own pressure groups, its own vested interests, its foothold within our government, and its own propaganda apparatus."