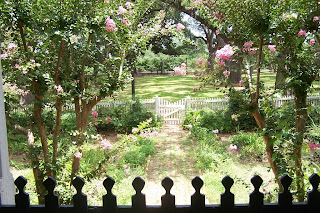 How easily I get distracted...

I read this story in the Houma Courier about some veterans who get upset when they see the American flag flown upside down at Tea Party rallies, for example, or at someone's home.  They say that's an inappropriate use of the flag with regard to the "distress" meaning.

I was going to blog about it and solicit your thoughts.  But then I went into my photo file to find a picture I took at the God and Country Rally in July, and realized I hadn't uploaded any pictures to my Flickr since like...April.

Well, since then I've taken pictures in Jefferson, at the BAFB Crawfish Boil, in Minden, in Natchitoches, and at Oakland Plantation.

Yeah, so I've spent the last hour uploading pictures and now I don't have time to blog about the flag story.  But feel free to read it and tell me what you think anyway!

And check out my Flickr pictures because I just spent the whole morning uploading them.  You can comment there, too.
Posted by Pat Austin Becker at 10:26 AM

Pat, interesting subject. I mentioned on a forum one time that when President Kennedy was assasinated in 1963, I was a junior in high school. One of my regular duties with a couple of others was the raising and lowering of the flag every day. We did it properly too, unlike I see it done at the Bossier Courthouse every day, but that's another story!
At the time he was shot, no one knew what in the world was going on, or if it was part of a larger conspiracy. When they announced that the president had died, our principal instructed us to bring down the flag, turn it upside down and raise it.
I was told on the forum (worse than blog comments!) that it wasn't proper, etc.
I believe that it was. A flag flown half mast show imminent danger in the form of mutiny, rebellion or attack.
It has been done as a form of protest before, usually by war protesters and more from the left than the right.
I don't believe that it is appropriate as a form of political expression, no matter what one feels about the current crisis (or any past ones).
I will agree with the veterans that it is not a good thing.

I am speaking as a veteran and will say I agree with you the flag should not be flown upside down for political protests. The flag is a symbol for all Americans regardless of their political views, as long as they aren't subversive to the Constitution.

Are we in trouble in America? That answer is HELL YES we are, but to use the flag as a rope in a political tug-o-war (the flag that covers the coffins of soldiers who defended the Constitution with their lives to preserve the rights of those they may have disagreed with) isn't the right thing to do.

What Jim, and GR said!

They stated it well, so I won't make a lame attempt at one-upping them.

Pat, I will just note along with you how distracting the end of August can be.

I guess things will settle out come September. I sure hope so, because there is a whole bunch of footbaw to look at by then, and I do not want to be distracted while trying to enjoy real life.

I show the flag upside down at my site because The Constitution has been discarded by those controlling the Executive and Legislative Branches of the national government. They refuse to obey it.

The nation is in distress.

I held off doing this until Obamacare passed and was signed into law. That marked the point where The Constitution became inoperative in Washington - all pretense gone.