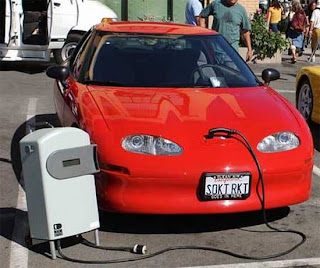 Apparently one good thing about my 8-cylinder Crown Vic is that I'm paying my fair share to maintain the roads.  You slackers with your mini-Coopers and your Volts need to step up and pay up:

After years of urging residents to buy fuel-efficient cars and giving them tax breaks to do it, Washington state lawmakers are considering a measure to charge them a $100 annual fee -- what would be the nation's first electric car fee.

And it's not just Washington:

In Oregon, lawmakers are considering a bill to charge drivers of electric and plug-in hybrid vehicles based on the number of miles they drive. In Mississippi, lawmakers briefly considered a similar plan. In Texas, significant opposition scuttled an electric vehicle fee.

Eventually this will get through the various state legislatures and so go the law of the land, no doubt.
If you don't like the one time user fee, you could live in California where one group would rely on honest drivers to report their own use:

Plug In America, a California-based electric car advocacy group, has come out against the proposed flat fee and has urged the state to consider one based on odometer readings that owners would self-report each year.

That'll work.  Sure.
I think I'll keep my Crown Vic and my unleaded.
Posted by Pat Austin Becker at 4:24 PM

And well they should. After all, the bennies for electric vehicles are all unrelated to road maintenance, repair and rebuilding. Well, except for the fact that electric vehicles don't really use the roads because they don't hold enough charge to actually travel anywhere...

Seems like the easiest way to do it would be to add it on to the license tag fee.

I love my 2001 Jeep Cherokee, and plan to keep it forever. But now I can't find non-alcoholic fuel any more so I guess I'll need to find an additive of some kind to protect the engine.

One thing occurred to me about this POS....what happens when you have a blackout and can't charge it?

I know it has a gas engine but doesn't go against the stated purpose?