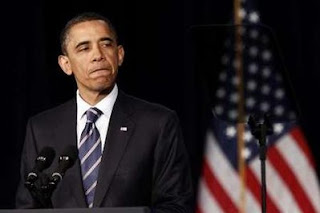 After reviewing Obama's speech yesterday (I had to read through it; I can't stand to listen to him anymore), it's become more and more clear to me why I've retreated into the world of antiques and art museums on this blog.  How anyone can continue to tout support for this man is simply beyond me.  I can't fathom it.

The consensus is pretty clear this morning that 1) It wasn't a plan on fiscal reform but a partisan campaign speech and 2) Obama is delusional.  Or else he thinks we all are.

Obama's answer to our economic woes is to pull his previous support of the Bush tax cuts (the support he held after he didn't support them), and raise taxes on the "rich."

The fourth step in our approach is to reduce spending in the tax code.  In December, I agreed to extend the tax cuts for the wealthiest Americans because it was the only way I could prevent a tax hike on middle-class Americans.  But we cannot afford $1 trillion worth of tax cuts for every millionaire and billionaire in our society.  And I refuse to renew them again.

This is absurd and has been debunked over and over again.  Raising taxes on the wealthy is the worst thing he can to in our current economic situation.  It's a job killer.  It's a growth killer. Even if you raised taxes on the top 2% one hundred percent, Walter Williams points out that:

...doing so "would yield the princely sum of $1.4 trillion. That would keep the government running for 141 days, but there's a problem because there are 224 more days left in the year." Even if all the annual profits of the Fortune 500 were also taken, it would only keep the government funded for another 40 days, according to Williams.

Obama is saying what he said to get elected last election cycle but it won't play this time.  Independents and even some liberals are beginning to see the light and are also sick of the excessive spending.  The only way to get the deficit under control is cut spending, not raise taxes.

Victor Davis Hanson suggests Obama is living in "a dreamland."  If that's so, the rest of us are in a nighmare.

Fantasy apparently seems preferable to reality. In our new dream world, borrowed money need not be paid back. Cars may run on nasty gas, but only if it is produced in faraway places. Mean dictators should flee when told to leave. And radical Muslims are not really trying to kill us.

Obama was still blaming Bush yesterday.  We were on the right path in the 90s, he said.  It's the past ten years that have got us all messed up. How long are we supposed to fall for that one?  I'd venture to guess that Obama has borrowed more this year than Bush did his entire presidency.

Mark Steyn blasted the speech and the speechwriters for it's misinformation, it's laziness and its partisanship:

The whole speech was like that, a litany of brain-dead slapdash rhetorical questions that for sentient beings are no longer rhetorical:

The bottom line of Obama's plan is that we're going to forge ahead with green energy even though it doesn't exist.  We're going to buy oil from foreign sources even though we have plenty of resources here and gas is climbing to $5 a gallon.   We're going to cut defense while we're engaged in three wars, raise taxes on those who provide jobs and growth, and implement a health care albatross that will saddle the country with inferior care, raise the deficit and expand entitlements, further deepening our economic woes.

Fore!
Posted by Pat Austin Becker at 6:35 AM

When I was growing up my parents told me how the country sacrificed during war. Both my grandfathers were in WW2. I thought that is what you do in time of war.
I am still appalled we are talking about Bush tax cuts. It's one thing to not sacrifice when we are at war, but to think you should pay less during war time blows my mind.
I think we should have a 10-20% war tax. I doubt these wars would go on as long as they have if the general populace had to suffer any. How many of you would become anti-war protesters if it costs you something out of pocket. Unless you got family or friends over there, these wars are like reality shows for the cable networks.
I don't like taxes, but Jesus himself in red words in the Bible said, "pay unto Caesar...".

I thought that speech was part of the latest trailer for the new Atlas Shrugged movie at first.

How come nobody has mentioned the 800 lb gorilla in the room that is the 2009 American Recovery and Reinvestment Act (aka the stimulus)? How much did that cost us- $700, $800 billion? And what exactly did that accomplish? I see the road signs go up every once in awhile, but wasn't it supposed to lift us out of the recession and keep unemployment below 8%?

I hear tell we have some experts saying that we're in a recovery- do most recoveries feature a cratering housing market, a plummeting dollar and record-high food, fuel and commodity prices?

As for the 10%-20% 'War Tax', aside from the government being provided perverse incentive to go to war, that's predicated on the hopelessly naiive assumption that the government would be responsible stewards of taxpayer money.