Was it Rebirth or Was it Not? UPDATED 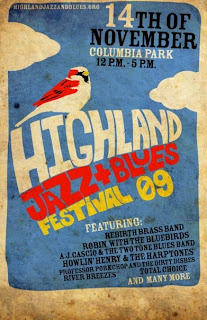 One of my favorite things to do in this area is go to the Highland Jazz & Blues Festival in November.  But here in March, the festival is turning into a little bit of a mystery for me.

The 2009 festival was attended by some 10,000 people, many of whom came to see the billed headliner, the Rebirth Brass Band from New Orleans.  The band was wonderful, the crowd danced and went wild, and I shot this video which I posted on YouTube:

The video has over 2,500 views at this point and I started getting comments like:

This is great, but I don't think this﻿ is the Rebirth Brass Band.

I indignantly defended myself - "of course it's Rebirth!  I was THERE!"

Not﻿ Rebirth. The tuba says it all. Or, in this case doesn't say it . Rebirth has their name in black letters on the tuba. This tuba doesn't have that . Doesn't sound like Rebirth, anyway. Are you sure it's not the New Birth Brass Band ?

And on and on.  Finally, I sent the video to Rebirth's promoter and booking agent, Howie Kaplan.  I explained the dilemma and told Mr. Kaplan I'd gladly remove the video if it's not Rebirth.  He wrote back promotly and said it's not Rebirth.

What?  I wrote him back and included some still pictures I'd taken at the festival of band members.  The video isn't very high quality, after all.  Nope.  Howie wrote back and said,

"I have no idea who those musicians are.  This is Rebirth."

And he sent this picture. 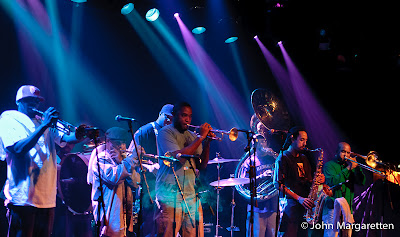 Sort of hard to tell, isn't it?  From so far away?  Here's another Rebirth photo: 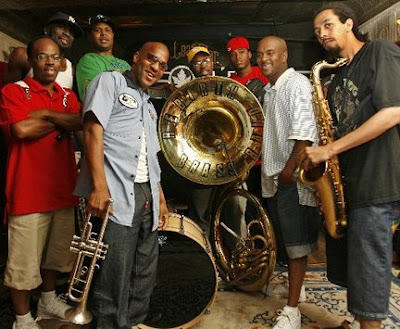 Here's what I sent Howie, the Rebirth promoter: 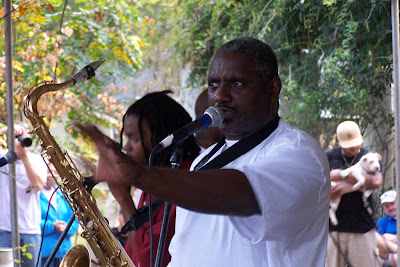 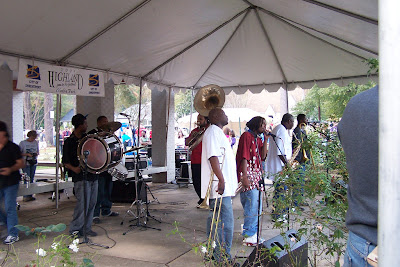 And this is a photo of Rebirth from Flickr: 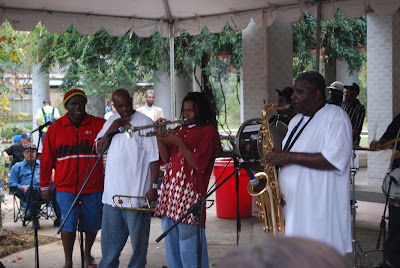 Ok, so it's difficult to tell by the photos, definitively, but it's clear that some of the members, at least, are not the same.  The tuba player is definitely not the same and the tuba this band had did not have the Rebirth trademark imprint on the instrument.   Tuba Phil, Rebirth's usual tuba player did suffer a medical issue in 2009 but was back with the band by November.  The saxophone player is definitely a different guy.  If you look at Rebirth's Facebook page and their own posted photos - not the same guys.

I've contacted Kenney Koonce and Amy Loe of the Highland Jazz Festival for comment and will update when they respond.

But at this point, I'm wondering, why would Rebirth's promoter completely deny that this is Rebirth if it is, in fact,  really  them?  He watched the video and looked at photos.  I certainly don't believe the promoters of the Highland Jazz Festival intentionally duped their audience.  If this wasn't Rebirth then likely the Highland promoters were duped as well.  Maybe some of the Rebirth members were in this group, but that's not exactly the same thing, either.

So, did we see Rebirth or not?  I don't really know.  I know these guys were pretty darn good and everyone had a good time!  I'll keep you posted as I follow this down.

With the exception of one sub, this is most certainly Rebirth Brass Band. We work with a reputable agent out of New Orleans to bring in performers from across the country. One band member is even related to local newscaster Mechelle White. Their identity was further confirmed by members of our organization who have seen them perform in New Orleans. I can't say why their agent would deny them. Unless they have changed members since he assumed the role of promoter.

This is likely another in the sagas of the (not really)'wonderful brotherhood of musicians'...of which I am a part for over 30 years as a pro...not uncommon to see bands being booked in several venues under the same name at the same time, sometimes some of the same players, sometimes not. Agents and managers have done this all along unfortunately, usually not known to the original artists. More $$$ that way. It's easier to do in the big band jazz world, not so easy in rock or country where the bands and artists are small and more recognizable.

Maybe there will have been similar players, maybe there is a suit going on between members after a split, over who owns the name, rights, etc. This even happened briefly to Pink Floyd! When your material is charted/sheet it's really easy. Illegal but they don't care.

At least you have the pictures, and this should be very easily cleared up. And I am sure the promoters of the Highland Fest and the legitimate members of Rebirth will want to know all about it.

Someone has done something very dumb or very unscrupulous, to be sure.